I enabled emacs keybindings as an experiment using gconftool-2 and setting /desktop/gnome/interface/gtk_key_theme to Emacs. I wasn't happy with it and set it back to Default.

I find plenty of references online on how to set emacs bindings, but removing them again is proving harder. Any suggestions on what to look for? (It is possible, of course, that I did something or that something happened beyond the gconftool-2 setting.)

The heart of the resolution is this:

Is this an insane request?

You can install the

Firemacs addon to get emacs keybindings in Firefox: 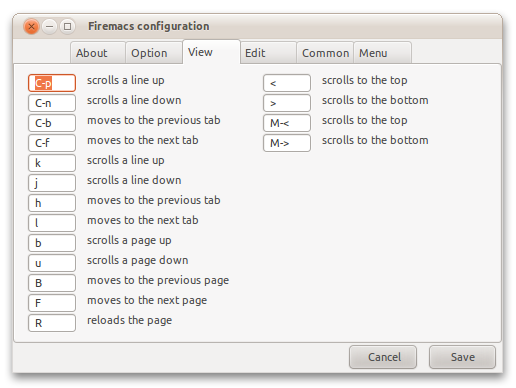 There's also a rather technical article on MozillaZine on how to enable Emacs-style key bindings for Firefox via GTK. Both work very well, but I recommend the extension since it's so easy to install.

I had the same error yesterday. I tried installing every emacs package in the repository, and when that didn't work, it occurred to me that maybe conflicts were the problem. Since I didn't need emacs23 if emacs-snapshot would work, I did the following:

Before proceeding, have a look at what emacs packages might be installed by issuing `sudo apt-cache search emacs'. If you can sacrifice everything in the output, go ahead with the following suggestion.

If something else shows up in the output that you wish to keep, a quick way to get rid of the things you don't want is to redirect the output of the command to a file, edit that file, and then use the contents of that file for arguments to apt-get remove.

You may get some errors here since emacs-snapshot failed to install correctly. If you do, try uninstalling those packages manually by first force installing the broken packages and then remove-purging them.

It's probably also a good idea to autoclean and autoremove.

This assumes that you have the PPA added correctly (I'm using the cassou PPA as well). Everything seems to work nicely now!

Since originally writing this answer I've moved on the using aptitude to manage my packages on the command line. I don't like the graphical interface (ncurses) you get from issuing sudo aptitude, so I only use it when I need to resolve dependencies/conflicts leftover from experimenting with different desktop environments. Most of the time, I simply use it as a drop-in replacement for apt-get, as in sudo aptitude install [package].