I have an Acer Travelmate C110 with Ubuntu 11.10. There's a built in network card, when I connect the cable to it everything works fine (mail, internet,…).
I now bought a USB ethernet adapter. (It works perfect with Win7 (had to install a driver)).
For ubuntu: Ubuntu installed the driver for it (dm9601) – i can check it with lsmod. I also have a eth1 when I check with ifconfig. There are two 'wired connections' in the network Connections dialog box. 'Wired connection 2' is the eth1. All settings are the same for both connections in this dialog box.

So everything seems ok yet no internet.
When I check through System Settings>Network, I have 2 wired symbols both say 'Cable unplugged'. Yet when i put the cable in the built in network card of the laptop: internet works. If I switch the cable to the USB ethernet adapter, ubuntu remains telling the cable is unplugged for that adapter – even if its the same cable.
If I switch the cable with adapter to Win7: everything works.

thanks for any suggestions!

Okay, after doing some more digging I found that you can easily install drivers by:

Other info I found is in another question.

If I understand your case right, and you have not already done so; delete the old network card from /etc/udev/rules.d/70-persistent-net.rules

Reason: The blacklist tells Ubuntu not to load it on detection of the hardware. If you have a configuration telling it explicit to load it later or another module depending on it loads, will it still be loaded. Unless you have also told Ubuntu how to "load" that module, look at the example, here we specify it to just run /bin/true or /bin/false instead of loading the module with modprobe eg.

Updated and corrected for your case:

Add one new line with the name of the module, sk98lin, at the end of this file /etc/modules. Now are we telling Ubuntu to load the sk98lin driver module at boot.

Then create the file /etc/modprobe.d/blacklist-marvell.conf and add the following on a line install sky2 /bin/false

And yes, you will need to update your init-ram-filesystem with the command sudo update-initramfs -u

If the above should not work for any strange reason, just remove all changes you did and try to do the dirty rc.local hack.

You have to either let the NetworkManager or the system(the interfaces file) configure your connection.

To let the NetworkManager do it, delete your old connection and click as picture show. 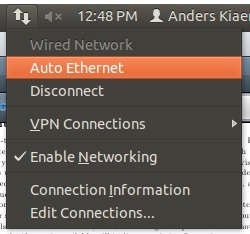 This kernel parameter solved the same issue for me (with a Dell DA200 USB3 dock):

which disables Link Power Management for the device. See also this bug report and this Github issue (for a different hardware with the same driver/NIC chip).