Having a really strange problem with USB drives. I have 2x5TB USB drives and during each reboot the partitions change randomly. Below is the output from lsblk 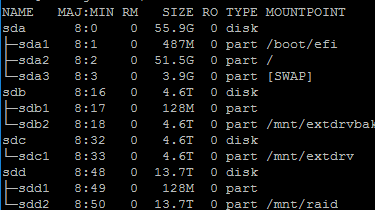 the two drives USB drives are (sdb and sdc). Sometimes when the computer boots sdb has sdb1 (128MB) and sdb2 (4.6TB), other times sdb will only have sdb1 (4.6TB) and sdc will have the 2 partitions. Below is the output from parted

I'm not sure why the drives are switching back and forth on that second 128MB partition. It's causing problems with using fstab to mount the drives.

One way I found to solve this problem is to use the UUIDs, create a mount point for my USB drive and add a listing to the /etc/fstab file so the USB drive is mounted the same every time on boot up.

I have a Seagate 3TB External USB, so this is what I did:

First, created a mount point for the Seagate drive:

Create one mount point for each partition you want to mount.

Then I obtained the UUID for the Seagate partition(s):

NOTE: UUIDs do not change unless the partition gets re-created and / or reformatted.

Now, every time my system boots the Seagate drive is always mounted at the same mount point. However, the drive designations are not always the same, i.e. /dev/sda1 now but next reboot is /dev/sdc1. So using the UUIDs makes it so the mount points are always the same regardless.

Ubuntu – How to change the device on which ubuntu boots

You should try setting one of:

in the file: /etc/default/grub

Ubuntu – Are there any advantages/disadvantages (if any?) in running luksFormat on raw drive (sdx) vs a partition (sdx1)

Offhand, I'm thinking that if your using the entire device (/dev/sdb) and your LUKS header is at the start of the drive, and if some other tool or OS "helpfully" decides that your disk is unformatted with no MBR or GPT, if it were to overwrite your LUKS header that would be bad. If you were using a partition for LUKS then at least a new MBR or GPT wouldn't be as devastating.

You should always backup the LUKS header anyway, as the cryptsetup man page advises too.

And this is what the cryptsetup FAQ says about using "2.2 LUKS on partitions or on raw disks?" (it's long but I'll just paste it, mentions RAID & LVM can greatly complicate things, you may want to rethink using LVM on top of LUKS):

This is a complicated question, and made more so by the availability of RAID and LVM. I will try to give some scenarios and discuss advantages and disadvantages. Note that I say LUKS for simplicity, but you can do all the things described with plain dm-crypt as well. Also note that your specific scenario may be so special that most or even all things I say below do not apply.

Be aware that if you add LVM into the mix, things can get very complicated. Same with RAID but less so. In particular, data recovery can get exceedingly difficult. Only do so if you have a really good reason and always remember KISS is what separates an engineer from an amateur. Of course, if you really need the added complexity, KISS is satisfied. But be very sure as there is a price to pay for it. In engineering, complexity is always the enemy and needs to be fought without mercy when encountered.

Also consider using RAID instead of LVM, as at least with the old superblock format 0.90, the RAID superblock is in the place (end of disk) where the risk of it permanently damaging the LUKS header is smallest and you can have your array assembled by the RAID controller (i.e. the kernel), as it should be. Use partition type 0xfd for that. I recommend staying away from superblock formats 1.0, 1.1 and 1.2 unless you really need them. Be aware that you lose autodetection with them and have to fall back to some user-space script to do it.

(1) Encrypted partition: Just make a partition to your liking, and put LUKS on top of it and a filesystem into the LUKS container. This gives you isolation of differently-tasked data areas, just as ordinary partitioning does. You can have confidential data, non-confidential data, data for some specific applications, user-homes, root, etc. Advantages are simplicity as there is a 1:1 mapping between partitions and filesystems, clear security functionality and the ability to separate data into different, independent (!) containers.

Note that you cannot do this for encrypted root, that requires an initrd. On the other hand, an initrd is about as vulnerable to a competent attacker as a non-encrypted root, so there really is no security advantage to doing it that way. An attacker that wants to compromise your system will just compromise the initrd or the kernel itself. The better way to deal with this is to make sure the root partition does not store any critical data and move that to additional encrypted partitions. If you really are concerned your root partition may be sabotaged by somebody with physical access (that would however strangely not, say, sabotage your BIOS, keyboard, etc.), protect it in some other way. The PC is just not set-up for a really secure boot-chain (whatever some people may claim).

(2) Fully encrypted raw block device: For this, put LUKS on the raw device (e.g. /dev/sdb) and put a filesystem into the LUKS container, no partitioning whatsoever involved. This is very suitable for things like external USB disks used for backups or offline data-storage.

(3) Encrypted RAID: Create your RAID from partitions and/or full devices. Put LUKS on top of the RAID device, just if it were an ordinary block device. Applications are just the same as above, but you get redundancy. (Side note as many people seem to be unaware of it: You can do RAID1 with an arbitrary number of components in Linux.) See also Item 2.8.

(4) Now, some people advocate doing the encryption below the RAID layer. That has several serious problems. One is that suddenly debugging RAID issues becomes much harder. You cannot do automatic RAID assembly anymore. You need to keep the encryption keys for the components in sync or manage them somehow. The only possible advantage is that things may run a little faster as more CPUs do the encryption, but if speed is a priority over security and simplicity, you are doing this wrong anyways. A good way to mitigate a speed issue is to get a CPU that does hardware AES.