I was running Ubuntu 17.10 on my mac (mid-2010) as a dual-boot with Refind as the boot manager. It was functional albeit non-optimal drivers for wifi and video card.

A day ago, the Software Updater app gave me the option to upgrade and I took it. It completed the install and clean up fully but I was unable to do a final restart due to power issues. Anyway, after the power issues were sorted out, I booted my laptop, only to find that it wouldn't boot into the OS and would get stuck in a loop at a screen which was filled with lines of code that made no sense to me.

So, I rebooted with option key and booted into recovery mode and ran check disk and fix broken packages and then resumed boot. Then it booted into the OS fine. I rebooted again, and then it went back to the screen with lots of lines of code which no sense. I tried the same thing again with the recovery mode again. And this time when it booted I picked the proprietary Nvidia drivers. Now when I boot, there is just a blank screen and I cant boot into recovery mode either because there is an error in EFI screen option.

So I boot into OS X and download the ISO file for 18.04 and make a bootable USB stick and boot into that from the EFI screen. Now, it boots and once past the orangeish blue bionic beaver wallpapers, it gets stuck in a loop at a message called setting locale.

So, at this point, I can neither boot into my HDD Ubuntu install nor into the Live Disk.

My next plan of action is to try and get an ISO of a previous version and try booting form that. I'd like to avoid that if possible and stick to 18.04.

EDIT 1: I flashed Ubuntu 17.10 onto the USB storage, and that boots fine. I'll try 18.04 once again. Also, I'm using Unetbootin for flashing the USB storage.

EDIT 2: This keeps cycling over and over when I live booted from a freshly downloaded copy of Ubuntu 18.04 ISO file flashed in to a USB: 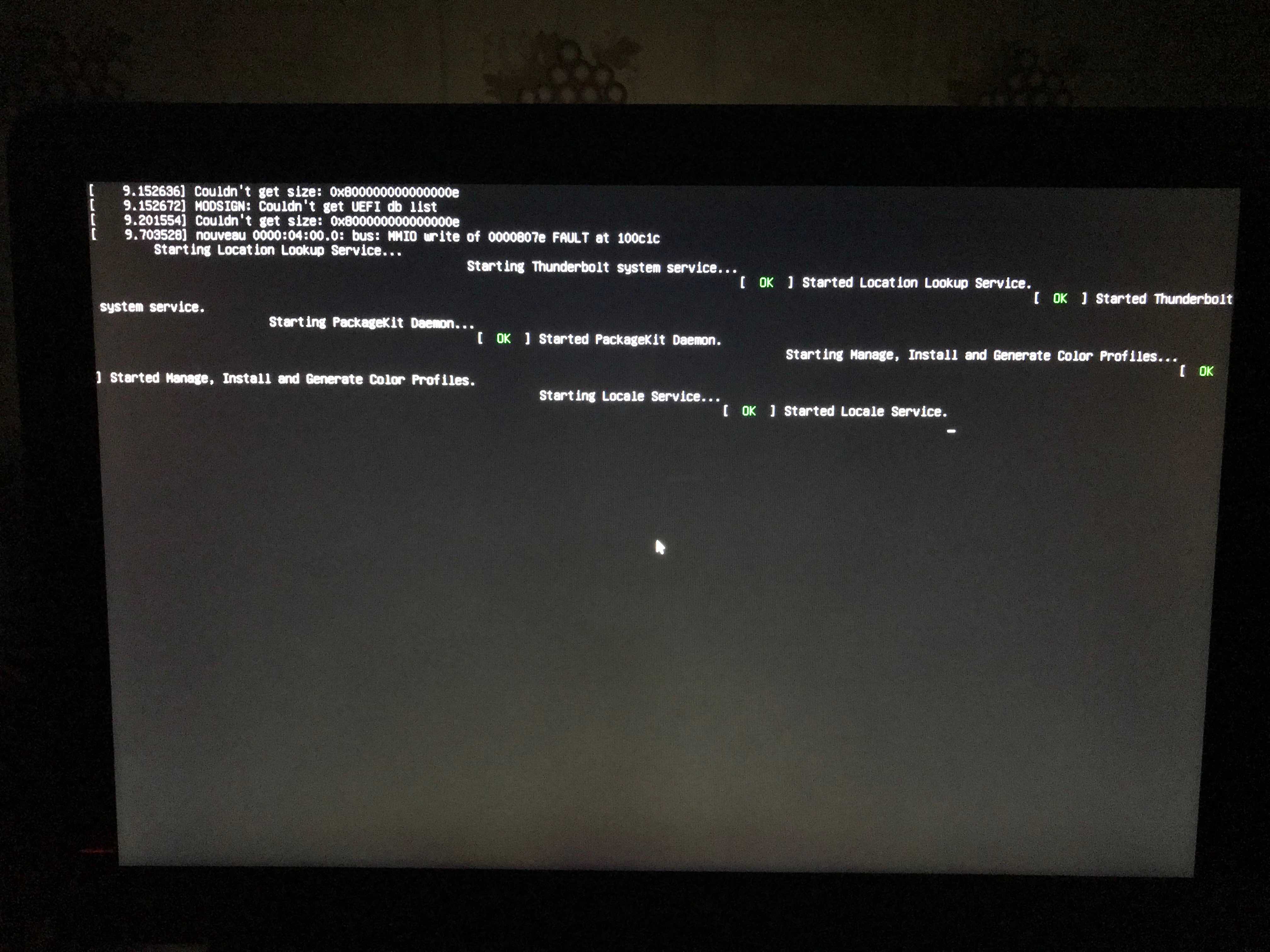 Keep in mind that when I do this on the same USB with the ISO file for 17.10.1, live boots perfectly fine.

I have pretty much the same issue on a mid-2010 MacBookPro 13 that single-boots Ubuntu. 17.10 worked fine. Upgraded to 18.04 by command line and now the graphical OS interface doesn't appear. I can SSH into the machine. I use the machine mostly as a file and web server, and those functionalities work correctly after the upgrade. The Nouveau video driver is in use, and text appears on the screen as described by numoonchld. I can get to text login using Ctl-Alt-F7. This is a Kubuntu installation, which uses sddm as the display manager/greeter. System log shows that sddm starts then exits. As part of diagnosing, I've installed Gnome desktop and it's gdm3 display manager/greeter, and got the essentially same result. Booting from USB device with 18.10 installation media hangs at some point with text on the screen. Because I use this machine as a server, I can live without the desktop, but I don't want to.

I had the same issue and was able to pass that step by adding noapic or acpi=strict (more lax approach to ACPI from kernel) to the GRUB boot loader line:

But after this, the boot gets stuck on another kernel panic related to EFI. This you can bypass if you tell the kernel to not start the EFI runtime -strongly not recommended:

But the boot doesn't complete and probably your mac will reboot without finalizing the full boot process.