What is the reason for having so many virtual consoles?

I would understand if there was one in case the GUI crashes but 6 more besides the default? What are they for? I even see no usage for any of them except when the GUI freezes.

More lengthy one: it is mostly a history thing, I suppose. There were 6 virtual consoles configured with getty in the first linux I booted with VC support, I really forgot when (it was around 1990, I think). Then when you started the graphical environment (by hand, with startx) it opened itself on the first free VC, which happened to be #7. And I still did most of my work on VCs at the time: the editors were much faster and sometime I used more VCs than the standard six, and my laptop was not exactly a graphic monster...

For example, I used to run three editors (a program, its input data, a TeX file describing it), one VC for compiling, another to read a manual, and another one connected via telnet to my mail server.

I suspect that the rationale for still using six virtual consoles is to let the graphic VC on #7 for everyone, so you can write on manuals "Ctrl-Alt-F7" and not "Ctrl-Alt-Fx where x is the first free VC".

As a side note, you can (I suppose --- never tried) trim down the VCs. Simply do

Ubuntu – Why is a virtual terminal “virtual”, and what/why/where is the “real” terminal

This isn't strictly true. Virtual Terminals are merely programs that send keystrokes and receive output (this is called Standard In, Standard Out[ and Standard Error]) to a process in the background. This is a basic input → processing → output system, and is at the heart of your operating system. 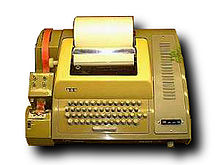 A teletype (or teleprinter)

Man working at a Computer Terminal

Let's see if I can explain it properly:

In a Unix–like system such as Linux there is the concept of "everything is a file". That means, for example, your DVD Drive is a file (/dev/sdb1), your keyboard is a file (/dev/input/keyboard) and so on.

Another set of those magical files are the TTYs, where TTY stands for Teletype. A Typewriter that sends keystrokes to a computer, which in turn sends letters back to the Type Ball. This would have represented a physical device, a remote typewriter, in the same way as /dev/lp0 may represent your printer.

A hardware terminal, the VT100

The Teletype workstations would have been called "Consoles" or "Terminals", a virtual terminal, as opposed to a real one, thus is any application or machinery that provides the same functionality as this workplace arrangement - which is accessing the computer by sending keystrokes to it and receiving output back from it, printing it to a piece of paper. You can imagine that a Modem works in a very similar way.

There are still terminal based computer systems in use. They are in fact getting ever more popular. In the past, the reason for terminals was that a computer at every desk was completely ridiculous - where computers filled a room and were immensely expensive. Now, it saves money and makes administration easy. 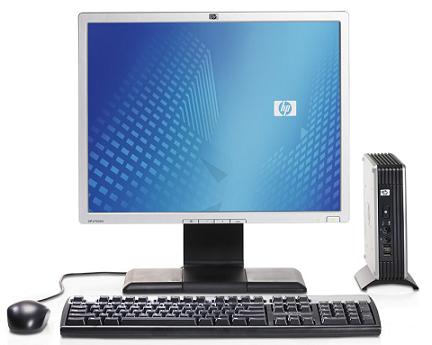 a "thin client" – the modern equivalent of the VT100

I hope that this is helpful. Please alert my if I've made a mistake.

Does that mean that Control-Alt-F1,F2,etc are also virtual terminals, and the only difference between them and "gnome-terminal" / "konsole" is that they don't have a GUI?

Yes, basically. The difference between TTY1-7 and gnome-terminal is that the system provides the ttys, whereas gnome-terminal and konsole are themselves running on a tty (which is running the graphical subsystem). This abstraction can be nested even deeper (e.g. x-forwarding, using the telnet protocol to act as a terminal, ...), after all, the human—computer interface acts just like any other file. And can be piped, abstracted and moved about in the same way.

Apparently, the current version of the driver on this card does not clone the console screen on all monitors, but instead displays it only on one, powering down the other two.

Adding nomodeset to the GRUB_CMDLINE_LINUX_DEFAULT parameters (so the line reads, for example, GRUB_CMDLINE_LINUX_DEFAULT="quiet splash nomodeset") in /etc/default/grub (and then running sudo update-grub) fixed the main problem; I now have normal virtual console operation. (I also got rid of the quiet & splash options, since there was no usable splash screen anyway, only a blank screen during most of the boot process.)

(Note that this solution does not do anything to help the problem of the "Authentication is required to update SMART data..." dialog appearing most of the time after switching back to X from text.)