I am trying to boot Ubuntu on my computer. When I boot Ubuntu, it boots to a black screen. How can I fix this?

If you are trying to install Ubuntu

1. Ensuring your CD/DVD or USB flash drive burned/written correctly and not damaged:

2. Black/purple screen when you try to boot the LiveCD

The Ubuntu installer's startup portion is sometimes incompatible with certain graphics cards. Fixing it and getting to the Ubuntu Desktop to try or install it can often be surprisingly easy fix: the nomodeset parameter. To see if it works for you:

You can also try acpi = off and nolapic if nomodset also shows up as a black screen.

when installing to an UEFI capable machine:

Ubuntu's installer 'when attempting to run in UEFI mode) will hang and stop due to different manufacturer's implementations of the UEFI specification and will hang in different ways. To identify if your machine is booting in installer UEFI mode you will see 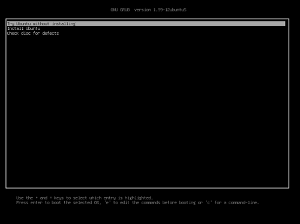 If your machine is CSM capable (which is a full UEFI implementation with an emulated BIOS layer) after selecting any option from the grub list the system will hang at a black screen.

The picture above actually only confirms your DVD/USB booted using UEFI and there will be some means in firmware settings to ensure drives are booted in order to make the UEFI installer run (a solution may possibly be as simple as ensuring SATA is set to AHCI) - check your vendors manual! Also check the UEFI Community Documentation Section 2.3 for more details.

What you need to do first is to disable SECURE BOOT in the firmware settings. If that does not get the Ubuntu installer running, try disabling anything mentioning UEFI in the firmware settings. Or
If you cannot find UEFI settings then enable CSM - this will disable the UEFI booting of the installer and then allow a legacy/BIOS install of Ubuntu.
Installing grub-efi afterwards will allow UEFI to be re-enabled. Again refer to UEFI Community Ubuntu Documentation at Section 4

Not all of these machines implement Secure Boot. Simply selecting UEFI in the BIOS settings will configure UEFI mode on hard drives. There is no solution for these errors and the workaround is to disable UEFI to enable the Ubuntu installer to run in legacy mode; after which boot-repair can be used to install grub-efi which then allows/needs UEFI switched back on before Ubuntu will boot using UEFI. Once again refer to the UEFI Community Ubuntu Documentation at Section 4

Black/purple screen after you boot Ubuntu for the first time

This usually happens because you have an Nvidia or AMD graphics card, or a laptop with Optimus or switchable/hybrid graphics, and Ubuntu does not have the proprietary drivers installed to allow it to work with these.

The solution is to boot Ubuntu once in nomodeset mode (your screen may look weird) to bypass the black screen, download and install the drivers, and then reboot to fix it for ever.

If you are running Ubuntu 12.04 or 12.10, and have a ATI/AMD graphics card, you have to follow the instructions here, otherwise you will run into this problem every time you restart your computer.

In case you've installed Ubuntu with LUKS encryption / LVM option, it could be that Ubuntu just asks you for your password - and you cannot see it. If you have a black screen, try pressing Alt+← and then Alt+→ to switch your tty, this may bring back the password query and turn backlight back on.

If you have a purple screen (maybe you need to set the nomodeset-option also?) and you have encrypted your complete Ubuntu installation, try to just type your encryption/LUKS-password after waiting some seconds (or minutes, just to be sure) and continue with a press on Enter. If this is successfull, you should see your Login-screen just a few seconds later.

Ubuntu – Computer will not boot. Black screen with cursor only

It seems like a hard-disk problem, are you sure, that you're hard disk is OK? (for a quick check you can unplug it, and try then to boot from CD/USB drive. Ok, for a laptop this won't be so quick, but maybe you can check from bios) Ubuntu should boot from USB or CD even if you don't have a hard drive, and for me it take long time to boot, when I had a faulty hard drive...