How can I resolve this issue?
How do I get my module signed for verification?

All what you need is described here

The kernel module signing facility cryptographically signs modules during installation and then checks the signature upon loading the module. This allows increased kernel security by disallowing the loading of unsigned modules or modules signed with an invalid key. Module signing increases security by making it harder to load a malicious module into the kernel. The module signature checking is done by the kernel so that it is not necessary to have trusted userspace bits.

This facility uses X.509 ITU-T standard certificates to encode the public keys involved. The signatures are not themselves encoded in any industrial standard type. The facility currently only supports the RSA public key encryption standard (though it is pluggable and permits others to be used). The possible hash algorithms that can be used are SHA-1, SHA-224, SHA-256, SHA-384, and SHA-512 (the algorithm is selected by data in the signature).

This has a number of options available:

Note that enabling module signing adds a dependency on the OpenSSL devel packages to the kernel build processes for the tool that does the signing.

Cryptographic keypairs are required to generate and check signatures. A private key is used to generate a signature and the corresponding public key is used to check it. The private key is only needed during the build, after which it can be deleted or stored securely. The public key gets built into the kernel so that it can be used to check the signatures as the modules are loaded.

Under normal conditions, when CONFIG_MODULE_SIG_KEY is unchanged from its default, the kernel build will automatically generate a new keypair using openssl if one does not exist in the file:

during the building of vmlinux (the public part of the key needs to be built into vmlinux) using parameters in the:

file (which is also generated if it does not already exist).

It is strongly recommended that you provide your own x509.genkey file.

Most notably, in the x509.genkey file, the req_distinguished_name section should be altered from the default:

The generated RSA key size can also be set with:

It is also possible to manually generate the key private/public files using the x509.genkey key generation configuration file in the root node of the Linux kernel sources tree and the openssl command. The following is an example to generate the public/private key files:

The full pathname for the resulting kernel_key.pem file can then be specified in the CONFIG_MODULE_SIG_KEY option, and the certificate and key therein will be used instead of an autogenerated keypair.

PUBLIC KEYS IN THE KERNEL

The kernel contains a ring of public keys that can be viewed by root. They're in a keyring called ".system_keyring" that can be seen by:

Beyond the public key generated specifically for module signing, additional trusted certificates can be provided in a PEM-encoded file referenced by the CONFIG_SYSTEM_TRUSTED_KEYS configuration option.

Further, the architecture code may take public keys from a hardware store and add those in also (e.g. from the UEFI key database).

Finally, it is possible to add additional public keys by doing:

Note, however, that the kernel will only permit keys to be added to .system_keyring if the new key's X.509 wrapper is validly signed by a key that is already resident in the .system_keyring at the time the key was added.

To manually sign a module, use the scripts/sign-file tool available in the Linux kernel source tree. The script requires 4 arguments:

The following is an example to sign a kernel module:

The hash algorithm used does not have to match the one configured, but if it doesn't, you should make sure that hash algorithm is either built into the kernel or can be loaded without requiring itself.

If the private key requires a passphrase or PIN, it can be provided in the $KBUILD_SIGN_PIN environment variable.

A signed module has a digital signature simply appended at the end. The string "~Module signature appended~." at the end of the module's file confirms that a signature is present but it does not confirm that the signature is valid!

Signed modules are BRITTLE as the signature is outside of the defined ELF container. Thus they MAY NOT be stripped once the signature is computed and attached. Note the entire module is the signed payload, including any and all debug information present at the time of signing.

Modules are loaded with insmod, modprobe, init_module() or finit_module(), exactly as for unsigned modules as no processing is done in userspace. The signature checking is all done within the kernel.

If CONFIG_MODULE_SIG_FORCE is enabled or enforcemodulesig=1 is supplied on the kernel command line, the kernel will only load validly signed modules for which it has a public key. Otherwise, it will also load modules that are unsigned. Any module for which the kernel has a key, but which proves to have a signature mismatch will not be permitted to load.

Any module that has an unparseable signature will be rejected.

When starting a new project, you need to select one of the "QML App with C++ plugin" templates: 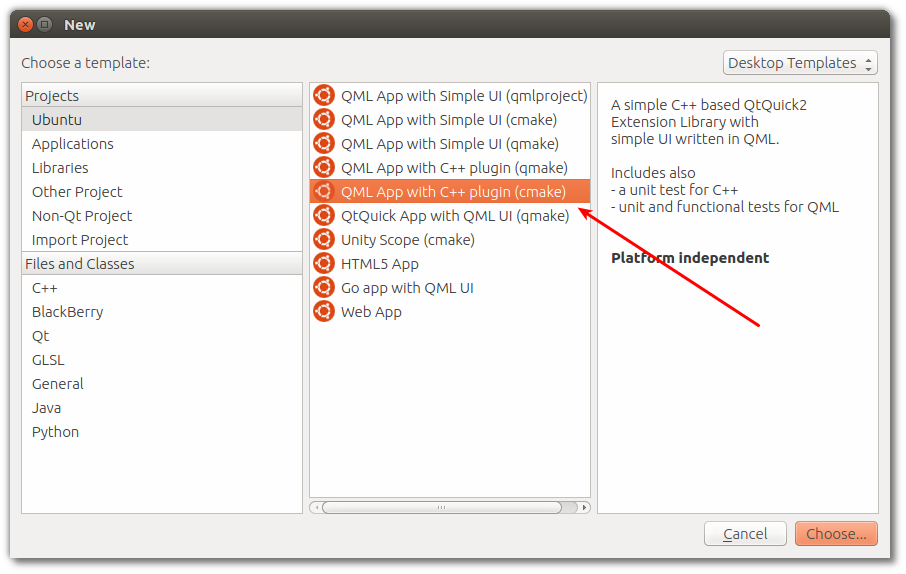 I personally prefer CMake over qmake, but either one will accomplish the same thing.

When the new project wizard completes, you will end up with an application consisting of a QML interface and a QML plugin written in C++. It also serves as a functional example that demonstrates how to invoke slots in QObject classes and pass information back to QML code.

The resulting module works as expected and can be inserted and removed with nice messages "<1> Hello World" and "<1> Goodbye" printed to dmesg.