So, I'm using Ubuntu for the first time, and I like it in general. I've got this problem with the launcher, though: I can't drag and drop ANYTHING on to the desktop, only make shortcuts and folders from a menu. If I drag and drop a file into the Desktop folder from the file system, I can then see it on the desktop. I've seen other people discussing this, so I guess it's a known issue — and responses range from "here's a workaround" to "just use GNOME". I guess what I'm trying to figure out is how the team could decide to make Unity the default UI on a distro made for simplicity and ease of use when it's still missing such an incredibly basic feature. Am I just missing something here? Is there an easy way to make this happen? If not, does anyone know… well… why?

Why Unity was made default in 11.04 despite of obvious short-comings? Easy, although I'm not a representative of either Canonical or anything like that.

In April, Ubuntu 12.04LTS will be released. It'll be supported on the desktop for 3 years. Gnome2 is deprecated and we needed something new. Supporting the old desktop until 2015 was not a real option. It was decided that Unity is the way forward and because of the extra importance of 12.04LTS, it was important to speed up development -- exactly because Unity isn't ready for the masses. The easiest way of doing that, is to get it into the wild as soon as possible, expose it to a large audience and get lots of feedback and bugreports. That way, it can be made rock solid and polished by the release of 12.04LTS -- which is when Ubuntu will hit the fa... masses.

10.04LTS has been quite nice since the day it was released and I'd say it's perfect for most users. However, it is not very appealing. Even if it's a modern operating system, it looks somewhat dated. And that matters to a lot of users. When 12.04LTS is released, it will be just as stable, user friendly and efficient -- but it will be much more appealing. Unity is a lot more efficient to work with too, which is very important to heavy desktop users.

But this was already a difficult cycle because of other changes in the "ecosystem", such as the transition to Gnome3. If the introduction of Unity was to be pushed into the 11.10-cycle, then that would leave absolutely no margin for error when it comes to 12.04LTS, which after all is much more important. If you gamble that nothing goes wrong, then I will take your bet.

So in essence, you might say 11.04 is something like a beta for 12.04LTS and the LTS-es have to have significantly higher priority. That's what most end-users will stick to, and that's what nearly all businesses will use. That's what third-party software developers will develop for, what computer manufacturers will bundle, etc. But even if non-LTS versions get a lower priority, that doesn't mean they shouldn't be of high quality. Going from 10.04LTS to 12.04LTS is likely to be much, much harder than from 12.04LTS to 14.04LTS, so even if 11.04 isn't quite as rock solid as we would like, I'm confident that it is an exception.

All things considered, I'm really impressed by how well Unity works. It's come a very long way in a very short time.

As you can see, I picked one of your questions and answered it. As to the other ones, I didn't really understand them. But the launcher is for applications, not for files, folders or other things. You have the files and folders lense for that.

Ubuntu – How to resize the Unity Dash

The solution depends on whether you are using the standard or 2D version of Ubuntu, which depends on your graphics card. (See: Am I using Unity or Unity 2D? )

Resizing the Dash in the standard Ubuntu

When opening the Ubuntu Dash, you should see three "window buttons" in the upper-left. Click the maximize button (the square) to switch between fullscreen and windowed mode.

Resizing the Dash in Ubuntu 2D

. Once it's open, navigate to the desktop > unity section in the left pane. You will see a form-factor option, which if set to 'Netbook' will made the Dash fullscreen, and if set to 'Desktop' will make the Dash windowed. 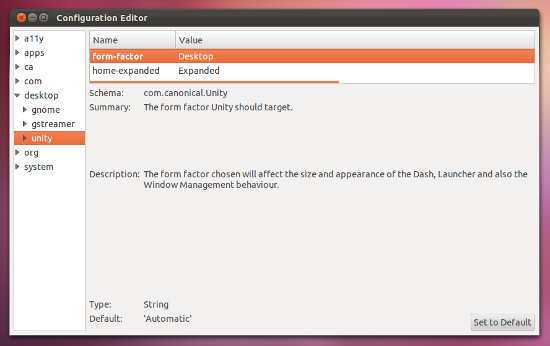 There are many unconfigurable parts of Unity, and this is one of them. The Dash has two modes (fullscreen and windowed) and you can switch between them using the methods above. You can't drag-resize the Dash.

In defense of Unity's design, though, there's no reason you'd want to resize the Unity Dash to arbitrary dimensions on the fly. You don't "drag and drop icons [from the desktop to the Dash] in order to create shortcuts", as the question asker mentioned; that's what the launcher is for. The Dash is designed to be the sole focus on your desktop when you use it.