I have a 3D video that I believe was recorded with a GoPro 360 setup. I would like to be able to share the content with those who don't have VR headgear so I need a way to view it on a 2D screen. How can I accomplish this with Ubuntu? (I'm using 16.04 Xenial if that makes a difference)

One way would be to obtain the GoPro VR Player which is currently available free in a deb package here The latest version available for Linux is 2.3.1 - 2017-05-19 which is distributed under v.2.1 or any later version of the GPL at your option It's built on libvlc. This version doesn't seem to require monkeying with any settings to get good results. You can toggle fullscreen simply by pressing F and although videos launch dead center split, simply hitting the <- or -> key or selecting Camera -> Left or Right from the menu will give you a 2D view of the 3D video.

Another way to accomplish this is to re-encode utilizing ffmpeg and the stereo3d filter which was designed for this purpose.

This results in a 2D (right eye only) output.mkv file.

The reason -metadata:s:v:0 stereo_mode="mono" is included on the command line is to remove the stereo tag because the metadata isn't piped through the filter system, and ffmpeg otherwise tries to duplicate the metadata of the original. Failure to include this can cause some players identifying the resulting video as 3D resulting in weirdness.

You can then view the resulting file with your favorite 2D video player.

Ubuntu – How to detect motion in a long, mostly dull video

VLC has a motion detection filter that you can try by accessing: Tools -> Effects and Filters -> Video Effects -> Advanced -> Motion Detect. 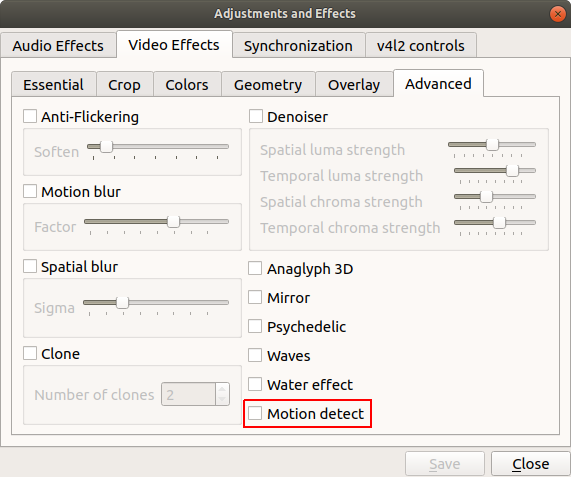 You might have more tweaks available running it from the command line with the --video-filter=motiondetect flag; check out this example.