Initially this question was limited to 11.10. Now I am in (Lubuntu) 12.10. (On the changes in the question see this meta question).

I have tried different (or not so different) approaches – that also other users commented here. My main references were:

None worked for me.

In time this answer became very long and cluttered as far as Ubuntu 12.04 - 13.10 are concerned. Below is an answer that presents the same solution but is much clearer.

But trying that in the 12.04 Ubuntu-based eOS Luna, I was not able to make it work. In fact my answers here for 12.04 and 12.10 stopped working after a while in Xubuntu and Lubuntu too, but I let those here because they seem useful to others that voted this up.

I have a new solution (tested in eOS and with 2.6 driver) - presented here.

I have followed the steps from Ubuntu Documentation page and the driver manual that comes with the driver:

NOTE Do not register the printer using the "lpadmin" command before restarting CUPS. Depending on the distribution you are using, the "For deb packages" command may not be entered. In this case, enter the "For rpm packages" command."]

Accordingly, I had to enter

Ubuntu documentation says: "* Note: Ubuntu 12.04 has again blacklisted the usblp module which creates the /dev/usb/lp0 device link. To solve this problem do this sudo nano /etc/modprobe.d/blacklist-cups-usblp.conf

Then comment the file to look like this, canons driver does not talk to the printer through cups:

So, as I am lost using nano, i tried

and added the above (blacklist-cups-usblp.conf was an empy file and i just pasted those lines)

(At this point, verify in main menu, under System/Printers, that the name of the printer recorded there is exactly LBP1120).

You should get something similar to this:

NOTE It would be convenient to set ccpd daemon to start automatically when Linux starts up."

After that, entering sudo /etc/init.d/ccpd status to see if I can see the 2 numbers (familiar from installation in previous versions): yes, there were 2 numbers. But no printing until logging out and connecting the printer after logging in.

I guess these rules have to be considered if printing doesn't work:

What will most probably happen is that you will need to restart ccpd daemon after each reboot in order to print: unless you set ccpd daemon to start automatically when Linux starts up - as the manual suggest. To do that add the following command to the startup-applications (as in the answers under here):

NOTE: On 12.10 this method worked for me on one computer, but failed on another. On 13.04 it didn't work at all. I succeeded to autostart ccpd deamon on 13.04 by adding sudo /etc/init.d/ccpd start to the startup-applications.

Idem, but I had to install the portreserve package for this method to work.

The Ubuntu Documentation website mentions that this printer was tested with Ubuntu 10.10. Although I currently use 12.10, I thought giving it a try. So, I have installed 10.10 as persistent live usb and followed the procedures under "Package Repository (before 11.10)".

Finally I was successful - following these steps:

Add the PPA to your system and install the packages:

System->Administration->Printing add printer. Choose "Add printer". Do not choose USB Printer found by Ubuntu here. Select "CAPT Printer". You should see "ccp" in URI. Change it so URI should become "ccp:/var/ccpd/fifo0". Click "next", find your model and add your printer. Choose English variant if you see Japanese and English variants.

Instead of GUI actions, you may try this:

You should get 2 numbers there, but I got just one.

So, in this case:

Also, in /etc/udev/rules.d/85-canon-capt.rules you should have this:

and then enable rules:

If you get the two numbers, try to print. And then restart computer.

If you run into problems try turning your printer off, restart your computer and only turn your printer on, after you have logged in.

I went back to the Ubuntu official documentation website on the LBP Canon driver package and after reinstalling version 2.3 of the driver from debian packages (using Gdebi), I followed the instructions from the section "Adding a printer" - without success. That despite the fact that I got the "two numbers" mentioned there (I quote: "You should see two numbers at the end. If you do, you are lucky :) etc").

I continued then with the commands under "Starting/stopping on USB add/Remove" but could not obtain the diagnostics cited there, nor print a test page as specified at that stage. When I followed commands under "Restart and Verify" I did not get "the two numbers" but just one.

I added the commands from the "Troubleshooting" section (in fact I stumbled over those here) - although I hadn't noticed the Status monitor reports error: I just didn't knew what to do anymore. That is:

Well, that did the trick!

Upon plugging in my USB printer I got the message that the printer was seen by the system and then I was able to print perfectly.

But, according to the following note ("Note: As of Ubuntu 11.10 (Oneiric Ocelot), usblp has been deprecated and will not be automatically loaded when you connect your USB printer") after restarting my computer cannot print. This is related seemingly to the bug #842823. At the address where the bug is discussed by Till Kamppeter I found and followed these instructions and been able to print a test page - but NOTHING ELSE. And the adventure continues: those instructions WORKED when I followed them again after following again the stages "Starting/stopping on USB add/Remove", "Restart and Verify" and "Status Monitor" from the official Ubuntu documentation page.

But I fear it is still a temporary solution.

EDIT: For me this was a solution just as far as it's the best i could achieve but would not work after reboot and it's cumbersome to use. I keep it just for reference. If others find it useful or amendable, please edit this to make it work.

Ubuntu – How to install drivers for a Canon LBP-2900 printer

For the printer, there is a script that should help you do this with little effort - my source is here.

You need to download the script from the Canon Website (you will need to extract this archive). Running the script from a terminal is easy: sudo ./canonLBP_install.sh LBP2900

First, navigate to Settings -> Devices -> Printers and see that your printer is added. If not click the add button and select appropriate driver (select it manually, don't use the default driver).

Once printer is showing up in above dialog, click the printer to select and then click the "Aditional Printer Settings Button". 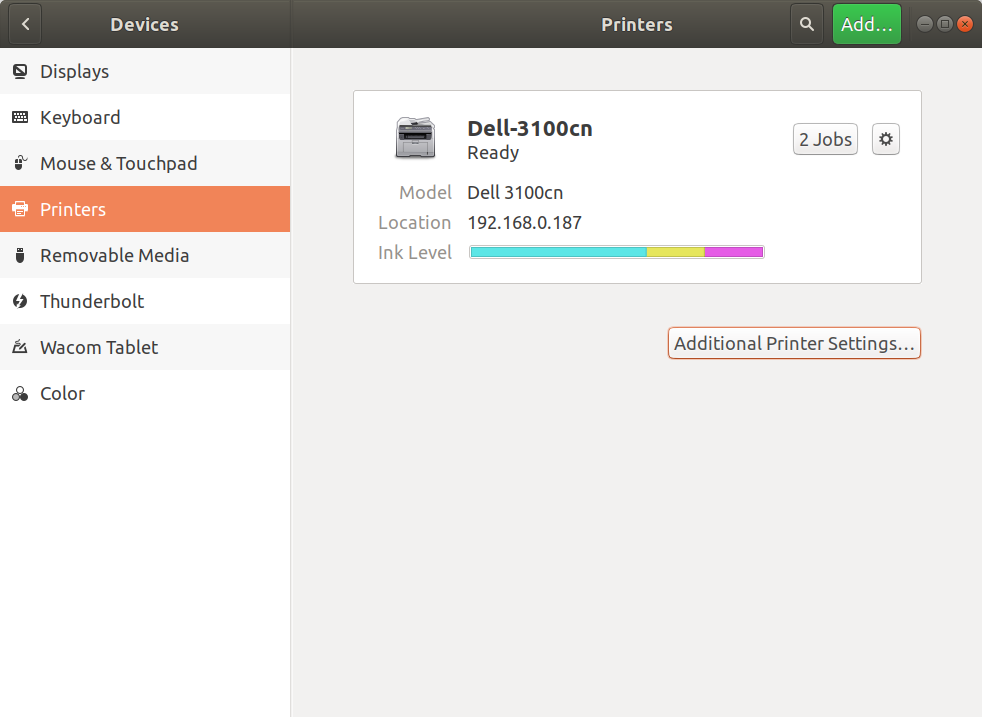 You will be presented with a small dialog box titled "Printers - localhost" you then select your printer and under the "Printer" menu click "Properties". You will get yet another dialog that will give you your configuration options for your printer.

The option to set up double sided is under "Printer Options": 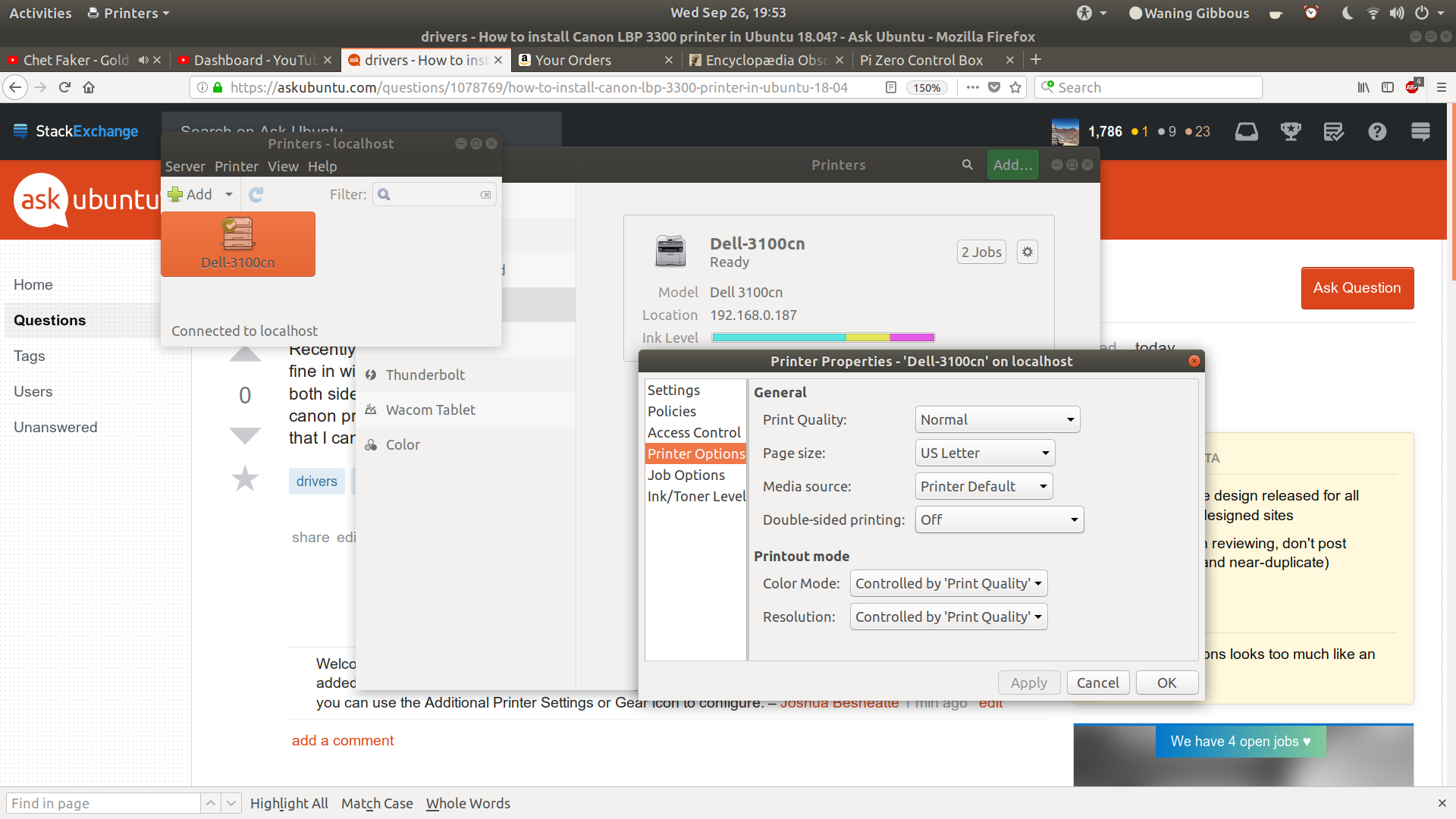