I constantly switch between Sublime Text, Terminal and Chrome. I'd like to bind shortcut like "Alt + 1" so my current Terminal and current Google Chrome opens.

Right now, each time i launch Google Chrome or the terminal, it opens a new window. Any idea ?

The method in drizzle's answer will work, but has a few downsides

You could simply do with the command:

which will raise the first found window with "chrome" in its name. That would however also raise the window I am writing in now (a firefox window, named: "Shortcut to open current Google Chrome...")

The use of the window's pid will prevent this. In my opinion, it is therefore more elegant to put the command:

under a shortcut key (Alt+1 will work), given the fact that you'd need to have wmctrl installed then:

How to add the command to a shortcut

The command is in fact a "conversion" of this one, and the explanation is similar:

lists all windows, including their pid and window- id. The result is piped to

which filters (lists) all occurrences of Chrome windows.

will give us the last item in the list, which is the latest created window (since wmctrl lists windows chronologically).

finally, will give us the first string in the line (from the output of wmctrl), which is the window- id.

Will then raise the last created window of Chrome

No need to say that you can replace chrome in the command by any other application (process name), and place them under separate key combinations.

use the application as an argument

Since you mention Sublime Text, Terminal and Chrome, you might want to use multiple shortcuts, and run the script with the application as an argument.

Use the script with slight difference:

and run it subsequently with the commands under the shortcut keys: 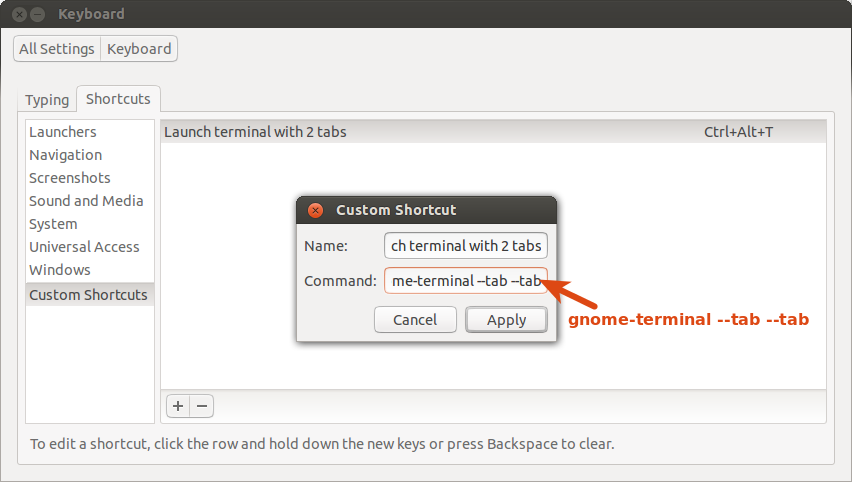 Select Reassign when you are asked:

Now, to open a new tab in gnome-terminal, you can use Ctrl+Shift+T. To access/view/edit your terminal shortcuts go to Edit → Keyboard Shortcuts...: 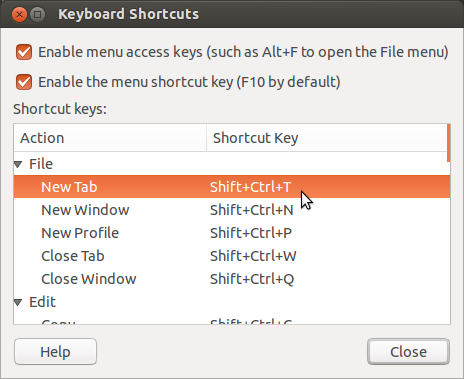 Ubuntu – keyboard shortcut to switch between windows within an application

The existing shortcut is Alt + key above TAB