Can anyone walk me through the process of installing Bitcoin on Ubuntu? I'm new to linux, and this is really all I want to do with this computer.

Launchpad has a Personal Package Archives (PPA) for bitcoin.

You can add this PPA to your system's software sources: ppa:bitcoin/bitcoin After that you can search ubuntu software center for bitcoin or from terminal sudo apt-get install bitcoin

By the way: bitcoin is only available for maverick and lucid so after adding the PPA change the distribution to maverick.

And a screenshot to finish it off: 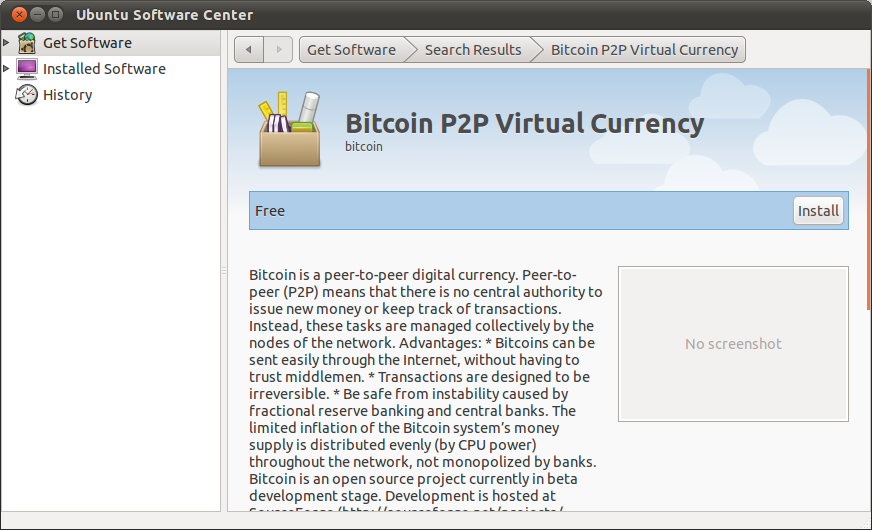 To change from 'natty' to 'maverick' for a PPA you can do this from the Ubuntu software center: 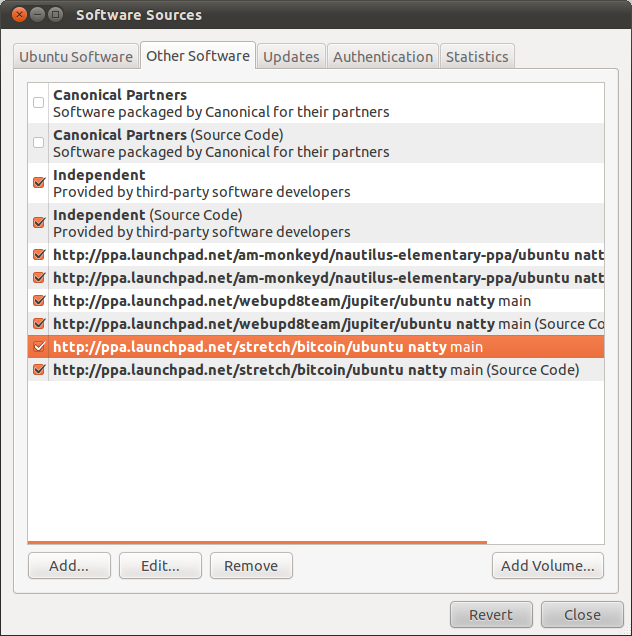 Click the bitcoin PPA and choose edit. Next it changing 'Natty' to 'Maverick': 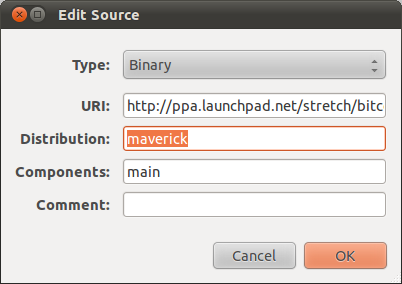 Reload the sources (it will prompt for it) and you should be able to install maverick's version of 'bitcoin'.

To summarise the conclusion of that thread, you should begin by making a full backup. Then, once you are sure your backup is secure, you can delete everything except the wallet.dat file in the ~/.bitcoin folder. This will cause BitCoin to re-download the block chain and restore the local block database. Don't panic if it initially shows a zero balance after restarting--it won't show your correct balance until it's downloaded the relevant blocks.

On a side note, this is also the safest way to perform an upgrade to a new version of the BitCoin software--backup everything, then delete everything except the wallet.dat file. When you run the new version of bitcoin, your balance will appear once it finishes downloading the blockchain.

Don't forget to head over to the BitCoin StackExchange proposal to lend your support and vote on sample questions! It would be great to have a single place for BitCoin Q&A across multiple platforms and scenarios.

First, the website says that the package depends on Python, twisted, and PyOpenCL. Python is probably already installed. However to make sure, run the following command:

Now, download the Source Code/Linux Release. You'll get a tarball, which is basically a package containing all the source files. Next, you need to untar (unpack) it. Use the following command:

where filename.tar.gz is the file you downloaded, which in this case is phoenix2-phoenix-v2.0.0-rc2-9-g2c83ee6.tar.gz.

After unpacking, it will create a folder containing the source files (in this case, phoenix2-phoenix-2c83ee6). Move into the folder using

Simply use the following command, and it'll take care of everything:

Note: If the installation fails, this might be due to unmet dependencies. In such a case, install the dependencies and try again.