I'm a newcomer to Ubuntu (due to the upcoming Windows 7 EOL) and I'm trying to test Ubuntu on a bootable USB stick, but I cannot get Steam to run because of a lack of space. How should I distribute the space on my USB so that Steam & a game can be tested?

I have used Rufus 3.8 to create a bootable USB stick containing Ubuntu 19.10 Eoan Ermine with a 16GB persistent partition.* I have been able to download the Steam installer. After installing, Steam downloaded 350MB of updates. Unfortunately, it has been unable to complete the update, saying that it needs 250MB more space. This appears to be correct, as Ubuntu's 'Files' utility say that the "casper-rw" partition only has 85 MB left.

The 'Disks' utility provides a different set of numbers. It says my 32GB** stick has a 14GB FAT Ubuntu partition (with 11GB free), a 17GB ext3 casper-rw partion, and 11GB free.

I am guessing that I need to make the persistent partition larger, but several points make me wonder whether I've done something else wrong. I am surprised that the Steam installer and runtime, without any games, have used up 16GB, because an installation is only supposed to require 5 GB. I am also puzzled that there is 11GB free in the Ubuntu partition: I thought that was supposed to be a read-only partition pretending to be a live CD, so there should not be any free (writable) space at all. Given that it's there, should I be trying to install Steam to somewhere other than the default location? Or should I try using Lubuntu or Xubuntu to make the OS smaller? Surely there's some way to squeeze Ubuntu and Steam onto a 32GB stick?!

**Let's not quibble about GB or GiB here as it's probably irrelevant.

Solution with a persistent live USB pendrive and Ubuntu 18.04 LTS

This method should work for you because mkusb is designed to work with all current versions of Ubuntu.

You can clone from a drive to another drive with mkusb. Start via the graphical interface or with

where x is the device letter or the source in the cloning operation. The target will be selected in a safe way via menus.

After the cloning you can edit the partitions with gparted. If you touch only the casper-rw partition and the usbdata partition (amd if an MSDOS partition table the extended partition), booting will not be affected.

Edit: How to edit the partitions to fill the drive.

If you cloned with dd you need to repair the backup partition table at the tail end of the drive with gdisk or maybe use gpt-fix.

where "$1" should be replaced by the target device /dev/sdx, if run directly (not within the shellscript).

These command letters are explained in

The crucial commands are

in the expert's menu

and in the the recovery & transformation menu

The other commands are verifying, moving between menus and writing.

Links added by the OP, @BlueSkies:

Unable to unmount a partition with GParted - is this a problem?

After cloning with mkusb, copying partitions from the original USB stick and booting from the new-larger stick, I'm unable to access the usbdata.

Advice: Please post the output of the following command lines (when booted from the new-larger stick),

where you enter the actual mountpoints to see usbdata and casper-rw.

This will help me understand what is the problem, so that I can suggest what to do next.

Please edit your original question to enter these output texts instead of here in my answer. Indent each line 4 characters in order to render the output as code. You can mark (high-light) the text and click on the {} icon at the head of the editing window to make those indentations quickly.

Outputs of the four above-mentioned commands:

The other one (sudo lsblk -m) outputs the following info: 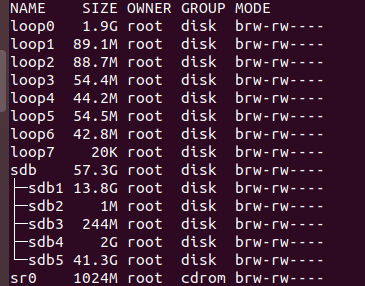 The last two commands and results: 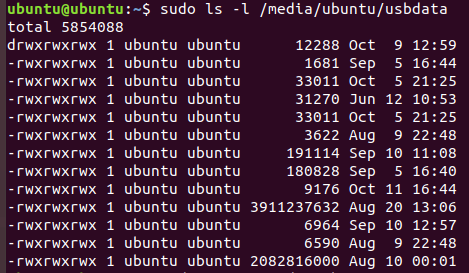