I downloaded a Greek subtitle for a movie, and this is what I see when I open it with Gedit. 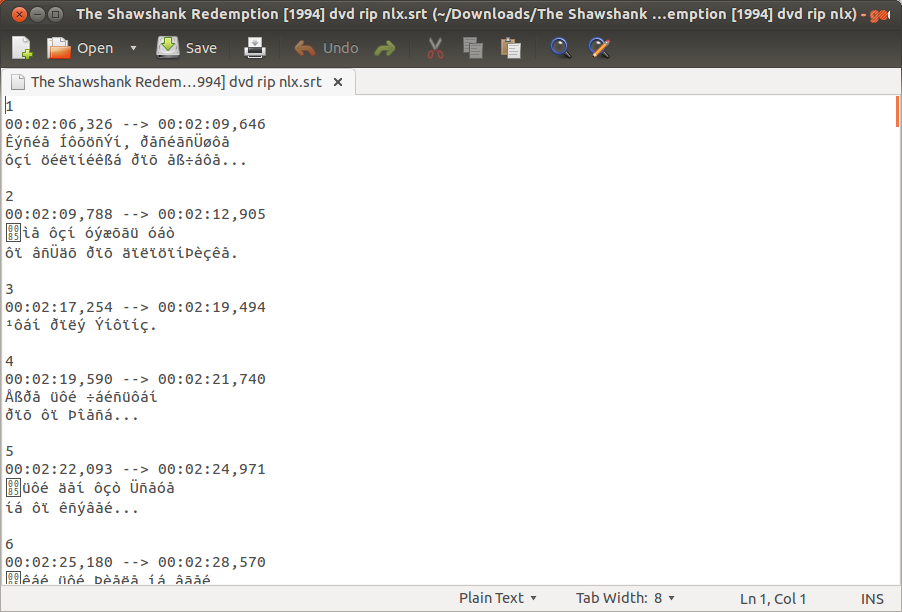 Subtitle works great on VLC, all perfect.
But what if I want to edit this subtitle with some Greek words? I instantly get an error about character encoding. 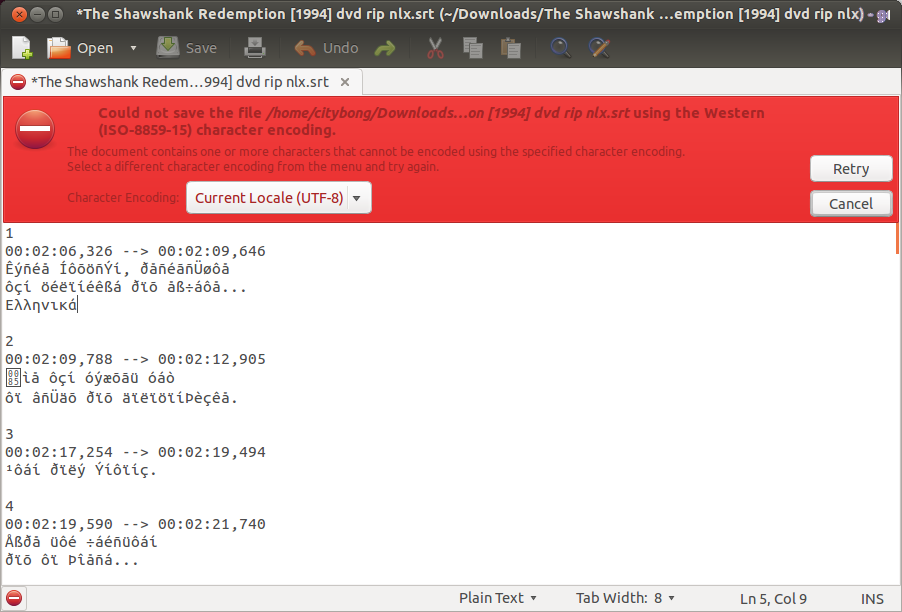 I hit retry and then VLC doesn't recognize the subtitles…

For subtitle edition/translation (text-based subtitles, that is), I strongly suggest Gaupol.

Besides of gaupol, you can also try Subtitle Editor and Gnome Subtitles.

However, from the screenshots, it is clear that your .srt file is not encoded in Unicode.

As it turns out, iconv does change the encoding of the file to UTF-8, but the converted file will still have the same characters you see when opening in Gedit.

The solution I found is this:

This same procedure of adding the codepage will work for Gedit. Yet I leave the instructions for Gaupol since this question is about subtitle files.

Ubuntu – How to see which encoding is used in a file

You can not really automatically find out whether a file was written with encoding X originally.

What you can easily do though is to verify whether the complete file can be successfully decoded somehow (but not necessarily correctly) using a specific codec. If you find any bytes that are not valid for a given encoding, it must be something else.

The problem is that many codecs are similar and have the same "valid byte patterns", just interpreting them as different characters. For example, an ä in one encoding might correspond to é in another or ø in a third. The computer can't really detect which way to interpret the byte results in correctly human readable text (unless maybe if you add a dictionary for all kinds of languages and let it perform spell checks...). You must also know that some character sets are actually subsets of others, like e.g. the ASCII encoding is a part of most commonly used codecs like some of the ANSI family or UTF-8. That means for example a text saved as UTF-8 that only contains simple latin characters, it would be identical to the same file saved as ASCII.

However, let's get back from explaining what you can't do to what you actually can do:

For a basic check on ASCII / non-ASCII (normally UTF-8) text files, you can use the file command. It does not know many codecs though and it only examines the first few kB of a file, assuming that the rest will not contain any new characters. On the other hand, it also recognizes other common file types like various scripts, HTML/XML documents and many binary data formats (which is all uninteresting for comparing text files though) and it might print additional information whether there are extremely long lines or what type of newline sequence (e.g. UNIX: LF, Windows: CR+LF) is used.

If that is not enough, I can offer you the Python script I wrote for this answer here, which scans complete files and tries to decode them using a specified character set. If it succeeds, that encoding is a potential candidate. Otherwise if there are any bytes that can not be decoded with it, you can remove that character set from your list.

Use namei to find if sudo owns some of your configuration files:

If you see root appear as owner or group (after the first two directories, / and home) then use this command: