If I modify /etc/pulse/default.pa and change this line:

I am clearly disabling tsched. Similarly if I change the line to,

I am enabling tsched. Both of these are verifiable by running,

And looking into documentation,

tsched Since 0.9.11. Use system-timer based model (aka glitch-free).
Defaults to 1 (enabled). If your hardware does not return accurate
timing information (e.g. Creative sound cards) you can try to set
tsched=0 to enable the interupt based timing which was used in 0.9.10
and before.

However I have two machines (different hardware), one which returns tsched=yes and one which does not.

There is a nice (technical) discussion here :

The role of sequencer =
Delivers events at the right time (sequence) to the right destination (device).

So this has to do with how the kernel manages your hardware , in this case your sound card. Some sound cards (commonly Intel ones) need real time sqeuencing.

The newer implementation of the PulseAudio sound server uses timer-based audio scheduling instead of the traditional, interrupt-driven approach.

Timer-based scheduling may expose issues in some ALSA drivers. On the other hand, other drivers might be glitchy without it on, so check to see what works on your system.

Ubuntu – What are the problems between PulseAudio and Wine

There isn't much of a problem at all these days.

What you're describing was years ago.

Applications under Wine only know how to talk to a Windows sound stack, so as with most of the other Windows subsystems, Wine provides this. The problem comes from our sound stack changing significantly in the last decade.

... we only had OSS and ALSA. They provide predictable interfaces but they aren't easy to code to. It took Wine ages to get to a "just works" point with their ALSA support. The stack diagram was quite simple:

The main problem with ALSA is it's notoriously finicky if you want more than one thing to play at once. Applications could accidentally lock it from others.

Then PulseAudio got popular.

Suddenly every desktop had this thing called PulseAudio. It was another layer between applications and ALSA to allow for many applications to make noise at once and add features like sound-over-network.

But Wine still only knew how to talk to ALSA, and there was now this PulseAudio thing hogging it right from boot. Wine's audio had to be piped through an ALSA compatibility layer into PulseAudio and then back out to ALSA. The stack shows how horrible this looks:

Additionally the ALSA emulation layer (provided by PulseAudio) wasn't great. It would support a couple of channels and a few recording options but nowhere near as much as the ALSA that PulseAudio itself sat on top of.

The perceived problem was always "the other guys' fault"

Audio in Wine didn't work. With hindsight it's easy to see where the problem really was but there were three opinions at the time that made Wine a real battleground:

And then things got better.

Everybody gave a little.

And while it might seem like it, I doubt that's not the end of this story. There are commercially-supported projects like OpenAL and GStreamer that could really simplify Wine's sound stack as well as providing extra features.

I've been writing this post for years and this is perhaps the weirdest thing yet. After dropping the PA driver development, somebody appears to have gone back to this and turned it into something real.

More than that, it got pulled in to the mainline version of Wine.

In an established prefix, just run wine regedit and change HKCU\Software\Wine\Drivers\Audio from alsa to pulse. Everything —including surround sound— seems to work. Here's the stack now:

Is it any better than the ALSA compatibility layer? I'm still unsure. I've tried what I thought were some of the buggier games and they still skip around a bit.

It work though, which is the main thing... but so did the ALSA wrapper in the end.

Ubuntu – the relation between ALSA and PulseAudio sound architecture

PulseAudio basically sits atop ALSA, and use it internally. ALSA is unable by itself to be used by multiple applications, so PulseAudio provides this functionality among others.

This diagram is from the Wikipedia page of PulseAudio: 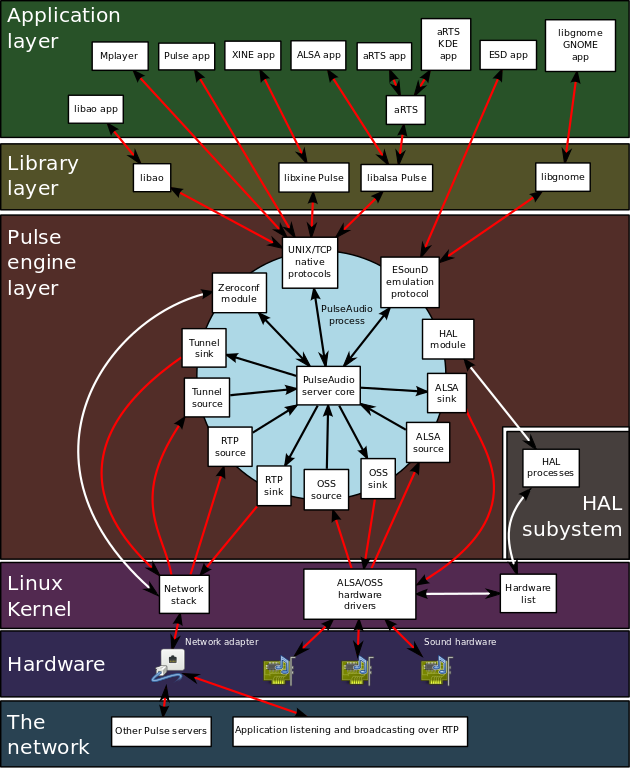