I am brand new to Ubuntu. I have just build my new PC, it has 2 separate hard drives installed in it. I would like to install Windows 10 on the first SsD (They are both 250GB Samsung 850 EVO) and i would like to install Ubuntu on the other and be able to choose to use either one or the other on dual boot. As i said I am brand new to Ubuntu. In fact, I have not downloaded or installed it as yet. I would like to know if this dual booting from separate hard drives is possible.

In this installation answer session for dual-booted desktop with two separate SSDs, the required procedure will be fully explained in detail.

The act of plugging and unplugging of SSDs from their sockets for dual-boot installation were discouraged and completely condemned because that act was going to harm your computer hardware.

This act of plugging and unplugging of SSDs have been practiced by a few just to avoid "an extraneous GRUB entry is being installed on the EFI Boot Partition of the Windows 10 SSD". It is wiser to attempt to remove such an extraneous GRUB entry instead of practicing this 'harmful' method of dual-boot installation. The removal of this extraneous entry is the role of Part-IV of this answer-session.

You should never unplug anything and never mess around your computer Hardware.

The first mistake was to purchase identical 250 GB SSD of same make. If I were you, I would go for a Kingston 250 GB SSD and a Samsung 250 GB SSD. When you open up BIOS setup screen you can immediately observe the bootloaders bearing the SSD brand. This will be helpful to find out what is where. Whenever your PC is opened up later for any reasons, from the color of SSDs itself, you can tell that, for example, Windows-10 was installed in 250 SSD Kingston (red in color) and Ubuntu was installed on Samsung 250 SSD (some other color) respectively.

You should never partition SSD! Allocate entire 250 GB to 'C' drive and have all the windows related systems and other programs in 'C' drive. Never keep any data in SSD.

Suppose you wanted to install complete Visual Studio Community 2017 RC (a free, fully featured version), then it is going to take around 80 to 90 GB of 'C' drive.

Other point of suggestion, is go for a hard disk at least 1 TB size. You need a place to keep your data, downloads and other stuff without disturbing your SSDs.

The following link gives you step-by-step installation of windows-10. Just follow the link and you must get Windows-10 installed.

After Windows-10 installation, you complete the formalities such as installing cumulative/security updates for your build version and so on. After finishing them along with other essential tasks, then you may resume back your journey towards installing Ubuntu 18.04.

As you have already admitted in your question is that your new to Ubuntu.

I welcome you to the fascinating world of Ubuntu whole heartedly.

I also made my Ubuntu entry recently, like you, just 7 months ago!

The first complexity begins during the installation is to partition your 250 GB SSD. There are varied theories exists and no second person agree with your partition! There is always a debate because every body is right!

I have a 120 GB SSD where Ubuntu was installed. Here is my partition details:

I arranged this partition setup particularly with Oracle 18c (Enterprise Edition) in mind. I would never ask you to follow my foot steps. Please never do that! You may have 2 partition or 3 or sometimes no partition, it is up you. This is the toughest part for a new entrant like you to negotiate with.

So, please do a thorough planning before you begin installation.

My partition table serves you as an example for an understanding of what partitions are. You may begin installation once your partition plan is frozen.

Next, during installation, at the time of dividing your SSD into partitions, be careful enough to select /dev/sdb. Because device /dev/sda has Windows-10 already installed. Once you cross this hurdle, the remaining part of installation is a cakewalk.

Now follow this link and you can easily install Ubuntu 18.04. This step-by-step procedure covers extensively regarding partitioning and teaches you how to do that.

1. Setup WiFi: Configure WiFi connectivity if you have one.

Set a password for root user in a single go:

Test it your root password by typing the following command:
$ su -

If you are unhappy with the new setting you can reverse it using: 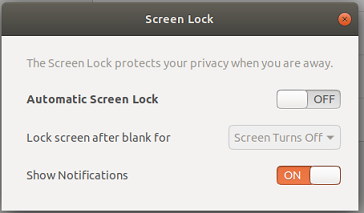 Ubuntu includes a dock-styled launcher (also known as "dock") on the left of your screen. If you don't like its position and the size of the icons on the launcher, you can adjust it easily through the settings.

Similarly, you can also auto hide the dock.

If you have successfully upgraded, then you move on to step-7.

If there are any issues due to "metered" internet and upgrade command interrupted, then upgrade can be resumed through following command:

Grub Customizer is a graphical interface to configure the grub2. The application allows the user to add, remove, freeze, rename and reorder boot menu items.

Open up terminal by hitting Ctrl+Alt+T and run following commands one by one:

Check the GRUB menu which should contain Windows bootloader at the top of the chain.

We have the following important task to complete before bringing this procedure to conclusion.

Part-IV: How to delete "extraneous" GRUB files from a Boot EFI partition in Windows 10?

What is this extraneous GRUB files?

This entry is done by GRUB (refer figure-8) after Ubuntu has been installed.

Whenever you do a dual-boot installation, this is an unwanted gift you will be presented with. This is reflected in BIOS setup screen as boot option #3 (refer figure-9).

Nevertheless, we will remove this extraneous gift subsequently. After this removal, BIOS setup screen will contain only two entries (refer figure-13).

Before proceeding further, I must introduce you my desktop configuration, otherwise it is difficult to follow the screenshots which you are going to face subsequently.

My system is a dual-booted desktop with a 250 GB SSD (Windows-10 installation), another 120 GB SSD (Ubuntu 18.04 installation) and 1 TB hard disk with three NTFS partitions which are mounted on Ubuntu as CodeWrite (read-only), ShareMe (read-only) and Warehouse (read-write) respectively. So, this 1 TB hard disk is sharable between Windows-10 and Ubuntu 18.04. All the copies of installable downloads not only for Windows-10 but also for Ubuntu 18.04 are kept under ShareMe. This arrangement helps to preserve storage space on both SSDs!

Note-1: When I assembled my desktop, I went for two 120 GB SSDs. I planned my desktop very carefully right from the beginning, made sure that my motherboard should have in-built Wi-Fi as well as Bluetooth and so on. The only blunder I committed was that I never anticipated that Visual Studio Community 2017 will take up my entire 'C' drive! This fellow has simply eaten away around 78 GB disk space on my 'C' drive. Thus, this oversight has costed me double the money, i.e I had to re-invest again on SSD by replacing the 120 GB SSD with a brand new 250 GB SSD. How much ever careful are you, sometimes you slip! So this was my story.

Note-2: The screenshots were all taken when I had two 120 GB SSDs of identical size. Please bear this in mind.

After the target disk has been selected, its partitions are listed, so that the partition (volume) that corresponds to the Boot EFI folder can be identified.

In figure-7 below, that partition is Volume 3. It’s usually the only volume with FAT32 in the FS (file system) column, and System in the Info column. After it has been identified and selected, you assign it an unused drive letter to make it easier to work with. In this example, I assigned it a drive letter G.

For example, if Ubuntu was installed, as in this example, the name of the folder will be ubuntu. Delete the folder using the rmdir /s command. That’s the Windows 10 equivalent of the Ubuntu Linux rm -r command.

To make sure that ubuntu has been removed, issue dir command again:

The output will show only two entries. 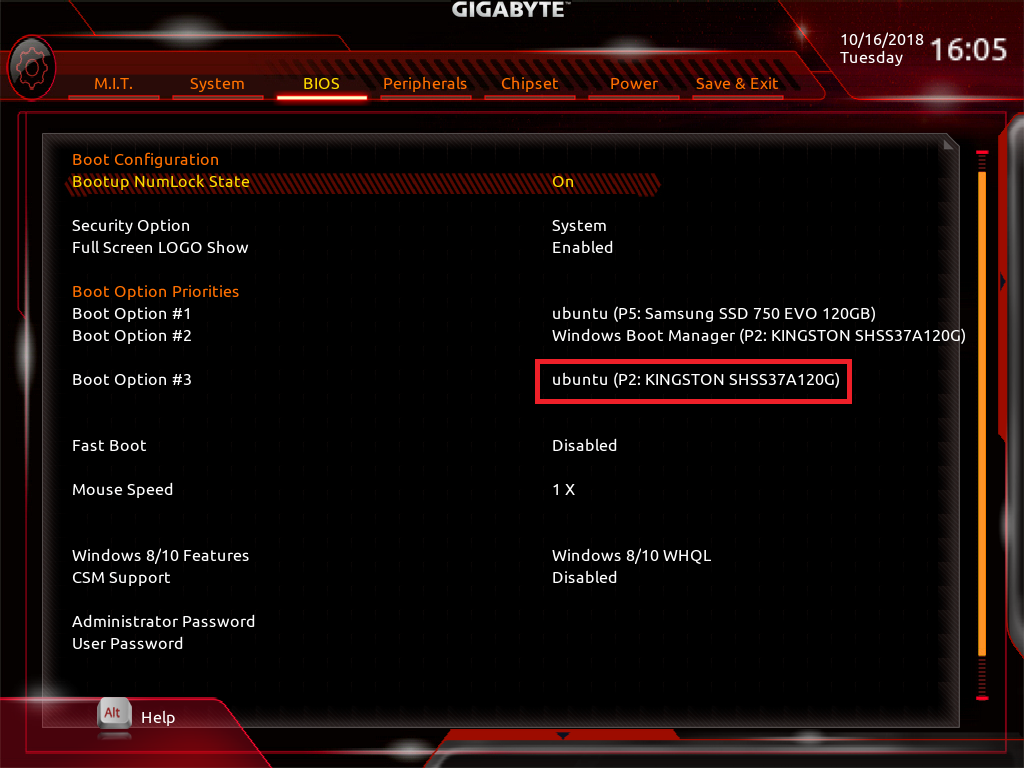 Now Look at the three boot entries in BIOS as shown below:

The Boot option#3 is the culprit which should be removed not only from SSD (Kingston) but also from GRUB boot loader:

We have already followed the steps in the beginning of Part-IV (How to delete "extraneous" GRUB files from a Boot EFI partition in Windows 10?) until now and removed the extraneous ubuntu directory from windows-10 EFI successfully.

Open up terminal by hitting Ctrl+Alt+T and run following command:

Boot entry 2 should be removed. How to confirm this?

Boot entry 2 has the same UID for SSD disk as boot entry 0 which is windows loader.

Now the entry has been removed. 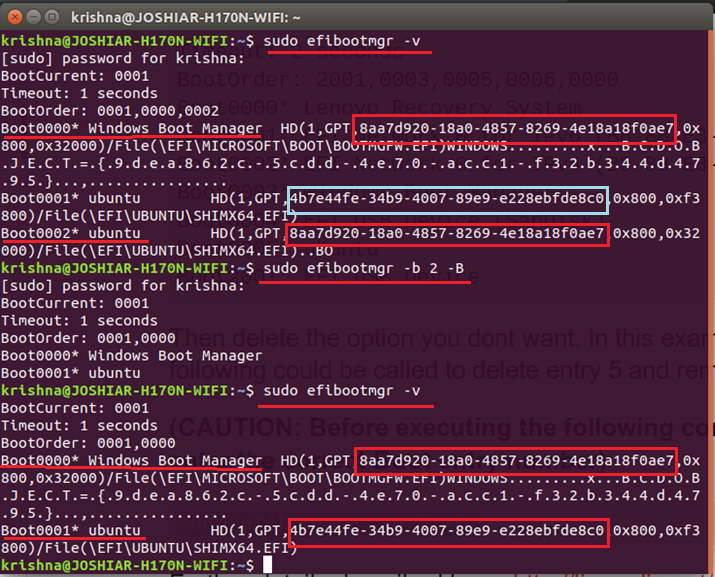 Figure-11: The process of removal of the extraneous boot entry created by GRUB

To confirm the removal, just issue the following command:

From the figure-12, it is clear that only two entries are present rather than three. Just see the entries marked with *.

Let is finally see BIOS setup screen below figure-13, to make sure that only two boot loaders are present. 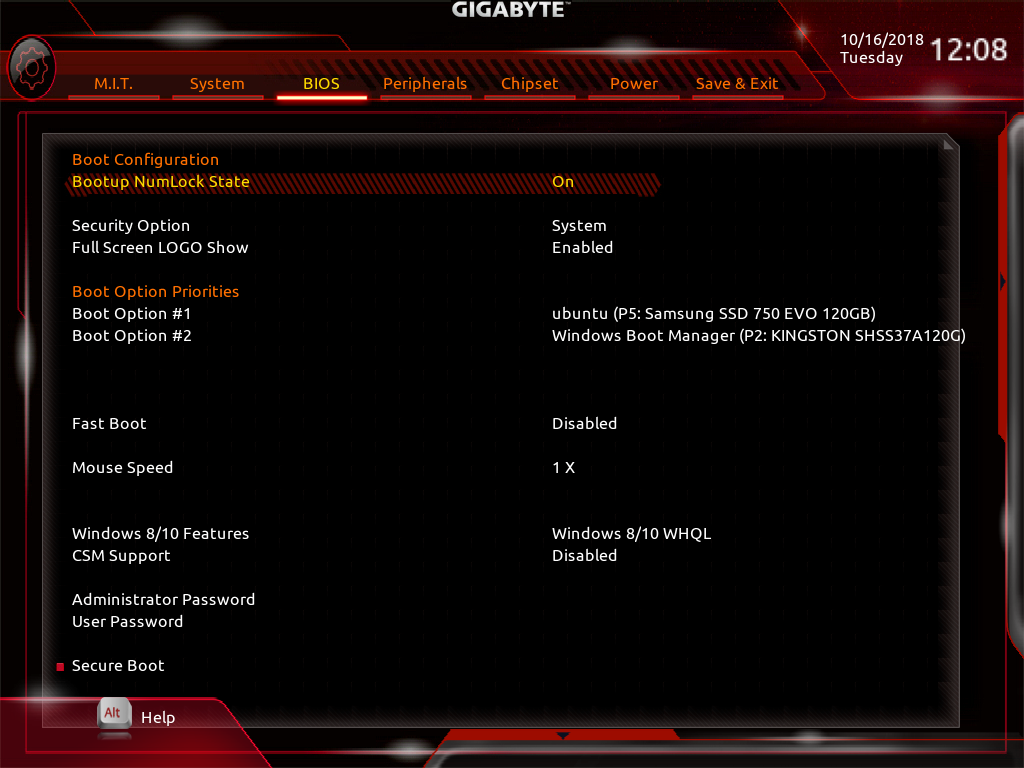 Figure-13: The extraneous 'Boot Option #3' has been totally removed from BIOS (compare with Figure-9).

In this installation answer session for dual-booted desktop with two separate SSDs were fully covered.

The act of plugging and unplugging of SSDs from their sockets for dual-boot installation were discouraged and completely condemned because that act was going to harm your computer hardware.

I am not an expert on this, but I have been messing with the boot order for a while, so telling from my some-what experience: So like the same way you get into UEFI settings, go to the BIOS settings (you can go to Advance Start-up, choose troubleshoot, advance options, then choose UEFI Firmware Settings - restart to get into it) [like you normally do]. After you get into the UEFI settings, you should see an option called BIOS settings or start up settings (some thing like that). Inside that, you should see an options that says Boot Priorities, Start-Up order (or something that means close to that). If you go into that subsection, you will be able to see which OS or devices have priorities over other installed OS(like Ubuntu)/devices(USB, DVD). In you case, probably Windows OS or UEFI is above Ubuntu OS. So change the order of it via the given control options to bring Ubuntu option above Windows.

These things differ for each manufacture, but the base operation is the same. If you give some more information about your computer's (that had Ubuntu installed) manufacture and/or model, I will try to be specific. [the mentioned above is for Dell Laptop]

Hope this information helps at least a little :)

I have noticed that the file that adds the efi-firmware option to the grub menu errors on some computers. grub installs but the initial grub-update to create the config file is what fails.

the file /etc/grubd/30_efi-firmware needs to be edited to remove the if/then statement. then update grub.

I've edited mine to read:

if your installer has a command prompt at the bottom. you can make this change and reinstall grub (nano is the text editor. you may have to comment out the gettext_printf line also ).

if not then, continue with out installing grub, and make the change from a LiveCD. and update grub.