How can I configure the touchpad and keyboard settings on a Dell Inspiron 5110? Nothing Work & i did google but find nothing

1. How do make 2 finger scrolling work + 2 fingers zoom in & zoom out work

there is an application called Touchegg but it is having issues with 12.04 and need to be fixed. So at this time, it won't do the job you want.

Touchegg is designed to bring multi-touch (touchpad) functionality to Linux based operating systems. In layman’s term, it is an open source multi-touch gesture recognizer for GNU/Linux which is backed by C++, Qt and uTouch-geis library. With TouchEgg, you can define what type of actions are to be initiated for a specific multi-touch gesture.

for more info have a look at my answer. I have guided through whole process.

You can bind any key to any script or abbreviation.

AutoKey is a desktop automation utility for Linux and X11. It allows you to manage collection of scripts and phrases, and assign abbreviations and hotkeys to these. This allows you to execute a script or insert text on demand in whatever program you are using.

Press Ctrl+Shift+N or from File > Create.. > New Script. Rename with whatever you like. 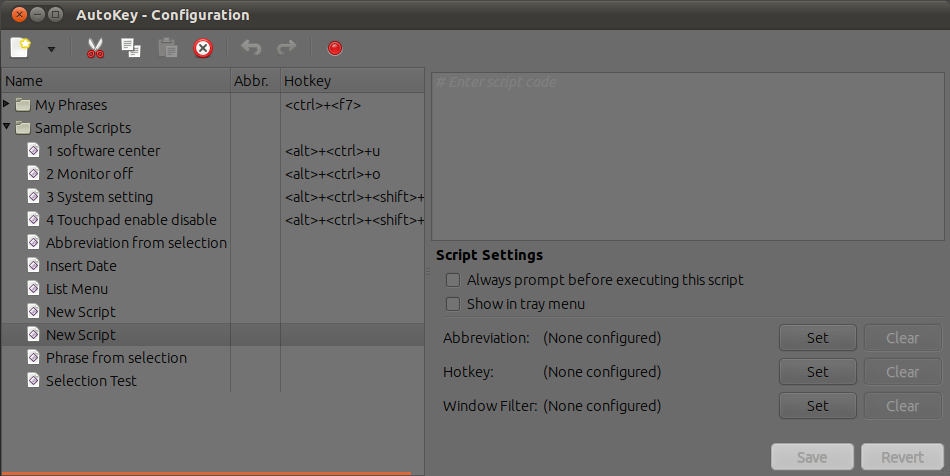 paste below code as shown, 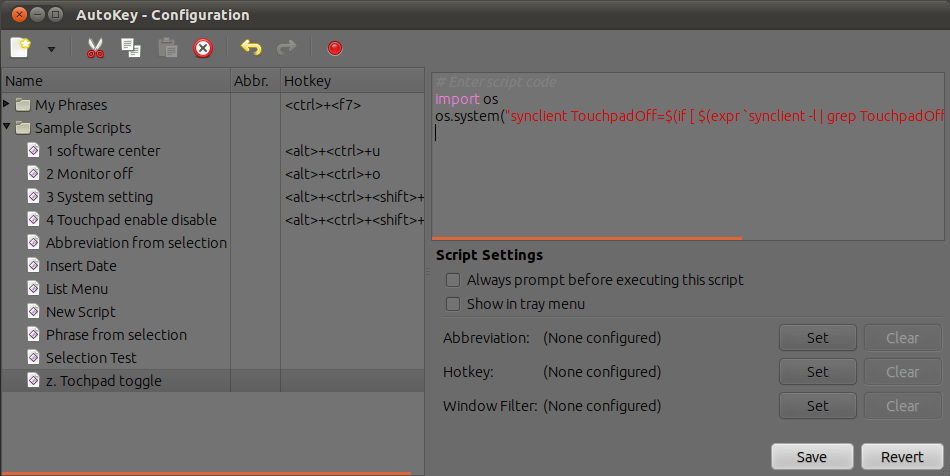 Then in bottom-right corner there is three Set buttons to set for Abbreviation or Hotkey or Window Filter. Click second Set button (because we want to set hotkey). 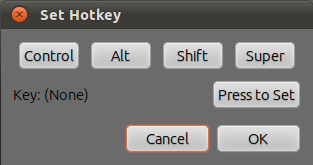 Click Press to Set and hit a key you want to assign(in your case fn+f3. I'm hitting fn+f1).

Now you will see your hotkey in left panel in HotKey column (in my case there is weird key like I because I have assigned fn+f1). 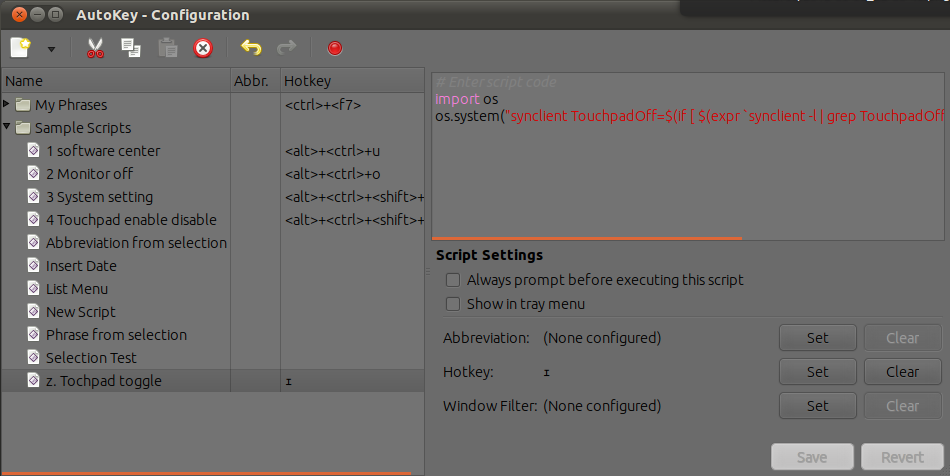 you have set hotkey for touchpad to enable/disable ( I have coded to make it toggle rather than just use to lock it. Perhaps you'd like it :-) ).

and set hotkey for 1 you have shown in screenshot.

thats it you have bound 1 for Software Center.

and set hotkey for 2 you have shown in screenshot.

thats it you have bound 2 for System Settings.

and set hotkey for 3 you have shown in screenshot.

thats it you have bound 3 for Monitor off.

Well, this is not the direct answer, but a suggestion and examples. If you run xinput, you will get list of your devices. Then run xinput list-props $id where $id is your touchpad id in the list.

You can change all of these on-the-fly with xinput set-prop $id $propId $value where $id is the device id, $propId is property id in brackets and $value is what you want it to be. For example:

You will need descriptions of properties and a way to make your changes permanent. Descriptions can be found in man synaptics, but wait, they are in another cryptic format! Let's see why.

To make changes permanent, you need to create conf file in /etc/X11/xorg.conf.d, for example 30-tochpad.conf with contents like these:

So, man synaptics describes options for xorg.conf and tells how they correspond to xinput list-props output.

PS. I tried to configure trackpoint on my ThinkPad X220 to have only two-fingers-scroll enabled, without clicks or mouse movement. I failed. Maybe you will manage to do what you want (there was an option to disable everything but clicks, maybe Synaptics Off).

You can fix it this way:

In the open window edit line

it should look this way

Save file and run

Please be careful, do not retype these commands, but copy them and paste into the terminal, or you can break the whole system, if mistype.

This solution disables Plug & Play for i8042 devices, then disables i2c-hid module and enables synaptics_i2c instead or it.

Plug & Play triggers a wrong module for this device.