After I managed to mount one of my windows partitions I worked with it for some time without any problems. After restart I can't access any more the partition, meaning the folder I mounted it on, still exists (obvious), but when I enter it, it is clean, meaning it has no data inside.

When I try to mount again my partition I get the following message: Mount is denied because the NTFS volume is already exclusively opened.
The volume may be already mounted, or another software may use it which
could be identified for example by the help of the 'fuser' command.

How to fix the problem?

To mount my partition I used the command line:

There are several ways a Windows partition can be mounted in Ubuntu. You have used the manual command line way using two commands.

The second command actually mounts the partition to the newly created folder.

When you reboot the computer, the second command is undone, but the first is not. That is, once the computer boots up again, the partition is not mounted on its own. Only thing that remains is an empty folder called Hard inside /media/alexandru/. This is why you didn't find any data inside the folder.

If you issue the second command again after the computer boots up, the empty folder will again be assigned to the Windows partition and you will see the data again.

There is another way to quickly mount a Windows (or any other) partition.

This is through Nautilus, the file manager. You should be able to see an icon for this partition in the left panel of Nautilus under Devices. 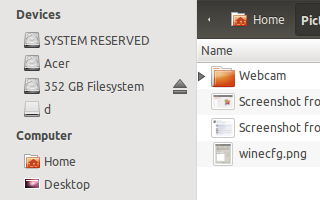 Clicking on this icon will mount the partition. The mount point will probably be different from the one you created, but this is the easiest way to quickly access a file from that partition. However, if you do this and then try to mount same partition using the command:

Then you will get the error you got, as the partition is already mounted on another folder. Conversely, if you mount the partition using the command first, you won't see the icon for the partition in Nautilus.

Third, automatically mount the partition on every boot

To do this you have to edit the etc/fstab file and add a line for the partition you want to auto-mount. See How to automount NTFS partitions? for various pros and cons of doing that.

You've probably followed this answer and that's a dangerous thing to do.

Ubuntu can easily recover data from a crashed Windows provided you don't have any hardware or Windows file system (NTFS) errors.

To get rid of NTFS errors you need to have Windows check your drive with chkdsk /f before attempting recovery under Ubuntu.

The "best" thing you can do under the circumstances you now have is to:

That's it! You will not be able to recover everything but let's hope that 87.5% is enough.