The 2011 Lenovo Essentials series have unusual factory defaults. Is is possible to install Ubuntu, or another Linux distro, on to them?

This answer is focused on the G570, but it is likely to apply to other laptops in this group.

It is possible to install Ubuntu onto your laptop, but it is likely to permanently remove your ability to run Windows on the G570.

The G570 comes with Windows 7 installed. It is conspicuously absent from the list of Lenovo laptops that can run Windows 10.

Multiple users report that the G570 does not have suitable drivers for updated releases of Windows 10.

Lenovo did initially support Windows 8 on the G570, but the G570 is explicitly not supported for Windows 8.1. Windows '8.0' has not been supported by Microsoft since 2016, so that is not an option either.

Since security support for consumer Windows 7 ends in January 2020, owners need an alternative OS. Unfortunately, installing Ubuntu (or other Linux distros) onto the G570 is also tricky.

A minor problem is that the battery management software is Lenovo Enhanced Experience 2.0, which is only available for Windows. As a result, you must select 'Maximum battery life' in Lenovo's Energy Management application before installing Linux, or your laptop will be stuck forever in 'Optimized battery health' mode, which targets a battery level of 50%.

The more serious problem is that the G570 was not supplied with Windows 7 installation disks. If you try to download an ISO file from Microsoft with a G570 product key, they will refuse and direct you to your OEM. Lenovo also do not supply installation disks for the G570. Because of its IBM heritage, the G570 instead comes with a product called OneKey Recovery 7.0 (OKR), which enables you to re-install or repair Windows 7 from a hidden partition called "LENOVO_PART" on the original hard drive. OKR is launched from a special button on the G570, which is controlled by a custom boot partition. In addition, OKR stores hidden files and backups on a logical partition called "LENOVO" (which Linux and Windows otherwise regard as a completely normal partition for data storage). 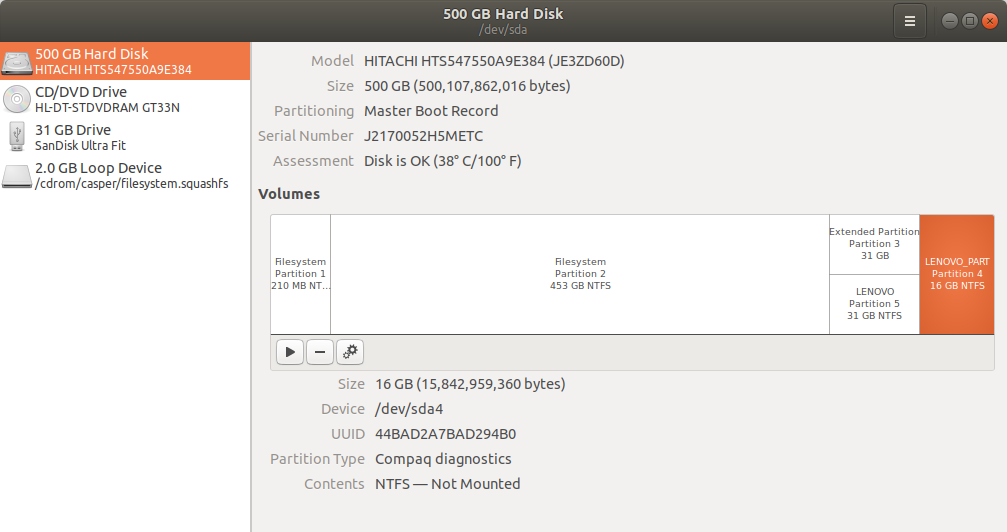 If you wish to completely and irrevocably replace Windows 7 with Ubuntu, this is not a problem. But if you want to be able to use Windows software again, now or in the future, it is therefore critically important that your installation does not touch either the hidden OKR partition or the custom boot partition and does not delete the "LENOVO" logical partition. Deleting any of these partitions will prevent Windows from booting. Attempting to backup the hidden partition in its default state will also prevent Windows from booting. If Linux does alter anything, then you may be able to repair it using a retail Windows 7 installation (not System Repair) DVD, but Microsoft no longer sells these, and you must use an SP1 DVD.

To deal with the case of complete hard drive failure, it is possible to use the OKR software to create bootable System Restore DVDs. If the partition boundaries have been altered, these DVDs cannot just re-create the hidden partition. But they are able to completely wipe the hard drive and recreate the original factory installation, including both Windows and OKR. But if either DVD is damaged, then you will not be able to restore your Windows 7.

More positively, user asanchez1987 on the CentOS forum reports that they were able to install CentOS onto a G570, without damaging either Windows or OKR. They first shrank the Windows primary partition (C: or /sda2) by 100GB. This left a gap in the middle of the drive: 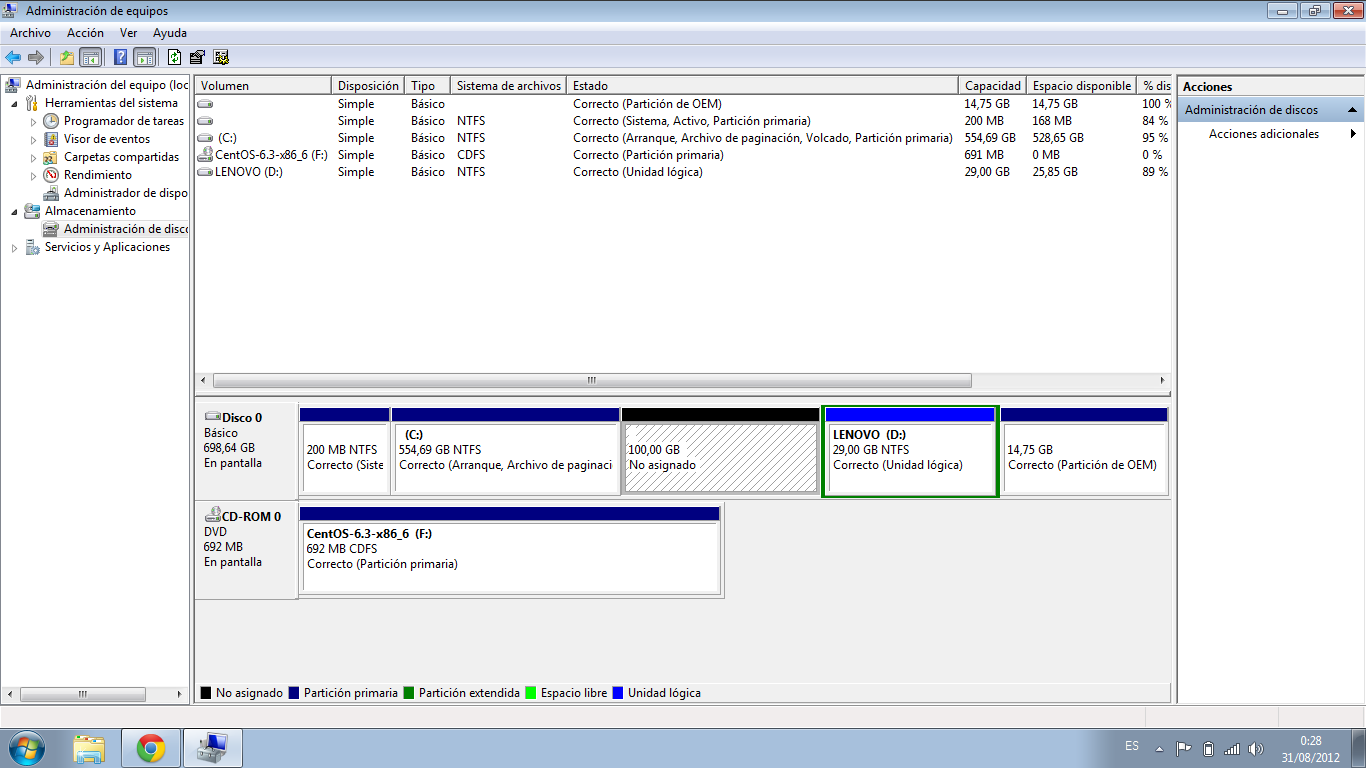 They then moved the start of the extended partition earlier in the disk using gparted (on a live CD). They then used CentOS' installation procedure to insert the boot partition at the start of the extended partition. They used something called an "LVM Physical Volume" to create the CentOS system and swap partitions. I suspect, but cannot prove, that this scheme was successful because it not only left the hidden partitions and files intact, but also preserved them at exactly the same bytes on the hard drive. Unfortunately, it is probably not possible to exactly replicate this method with Ubuntu, because the Ubuntu installer insists on placing Grub in the MBR. In fact, it is puzzling how CentOS was able to this without altering the MBR. It may be noteworthy that asanchez1987 never explicitly stated that they were still able to boot Windows after installing Linux.

BTW if you follow some of the links above, you will see discussion about adding the OKR partitions and files to a system that already has Linux/Windows. These netizens are talking about the OKR Engineering 7.0 DVD for Lenovo staff, which is different from the OKR System Restore DVDs. In the past, Lenovo seemed fairly relaxed about users pirating it, but 7.0 no longer seems to be available from anything resembling a trustworthy source.

BTW, my Lenovo G570 does not use UEFI. Some people have UEFI on its 2013 grandchild (the G580) but this can be damaged by an Ubuntu installation.

You can use 'wubi' installer given in the ubuntu download image file.

Now just double click the 'wine.exe' file. Now it will ask you to allocate some space for ubuntu (Note: ~18GB space is by default selected). Give the password and let it do other for you.

It will ask to reboot. Just reboot and on the next start you will see installing ubuntu. Just follow the on screen steps and you are done.

Now on each start, it will ask you to choose OS to start. Just give your choice as ubuntu (if you want) and use ubuntu. It will work as dual boot OS parallel to windows.

The great thing is that you can remove it whenever you wish just as you remove other installed programs from windows. Just boot into windows, and go to 'Remove/Uninstall Programs' and uninstall 'wubi' and 'ubuntu'. Now you are done..

I was able to install Lubuntu 17.10 onto a Lenovo Ideapad 100S, I think mine might be a little later generation (14-1BY) because the bios does allow modification of boot order, and other things I'm used to in a bios.

Regular install of just the standard 17.10 64-bit iso for Lubuntu did not work; booting into the LiveCD was fine, install seemed fine, but then it wouldn't boot on its own. Through searching threads like these, it seems the Ideapad really does need a 32-bit booter.

I was able to get there (pointed to by other posts like this) using isorespin.sh. I respun the lubuntu 17.10 64-bit iso with options --atom -u -s 2GB (-u updates to latest kernel, and -s makes a persistent partition, because I thought, if this fails, at least I'll have a more usable bootable USB). Check also respun ISOs (suitable for Intel Atom and Intel Apollo Lake devices).

Before, with preinstalled Windows 10 and Quickbooks and Chrome and THAT'S IT, the measly 32gb drive was full and screaming about windows updates it couldn't apply because it had no room. It's irresponsible of Lenovo to make a pc with a drive that small and sell it with windows 10 on it. I pity all the less-computer-literate, low-income households that bought one of these because of the price, and found it largely unusable.

Now with Lubuntu installed I've got 22GB drive space available! More than I'll ever need because this box will only ever need to be used for browsing (including document and spreadsheet writing in Google Docs).