The same error as described here appears again in Ubuntu 12.10. I get it several times a day. xdiagnose 3.2.3 is installed. Here is a screenshot of the details: 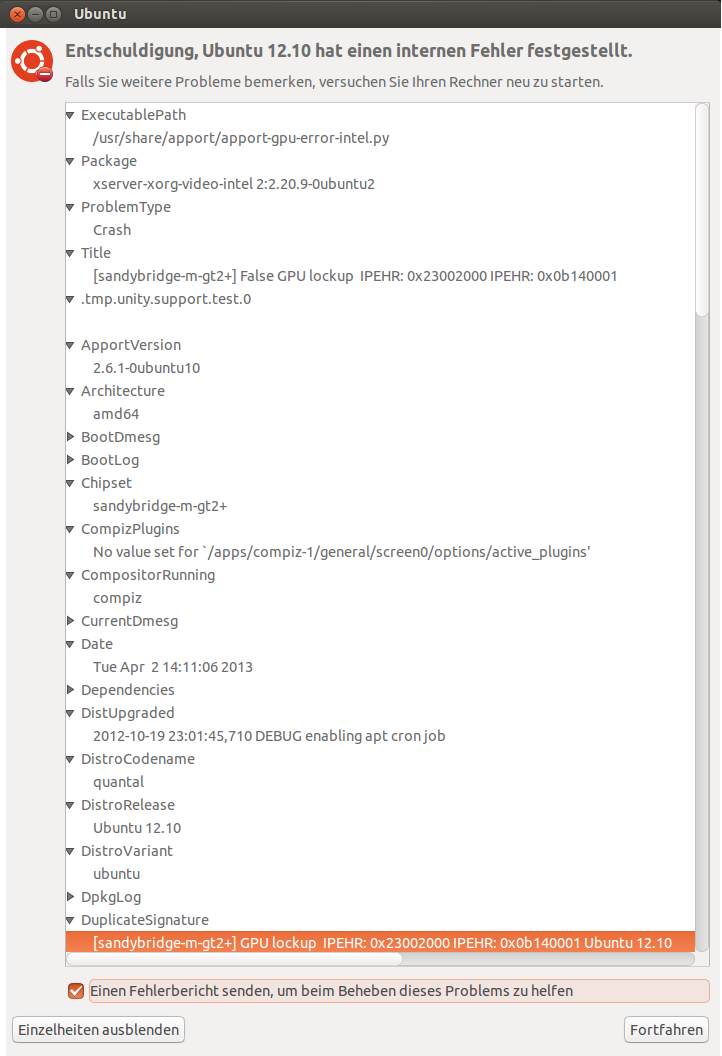 Hope you can help. If you need any more details, just comment and I will add them.

Ubuntu – How to i report a bug about apport-gpu-error-intel.py crashing

In this case, the source package has the same name as the binary package (xserver-xorg-video-intel), but that may not always be the case (e.g. binary package apt-utils has source apt)

Bugs for that package can be reported on https://launchpad.net/ubuntu/+source/xserver-xorg-video-intel/+bugs

Potential Reason for These Unreportable Errors

I think I've figured this out. I think that this particular bug reporting avenue is a hangover from the alpha and beta development stages--when the developers wanted as many bug reports as possible, regardless of whether the user was willing to file a full launchpad bug report or not. Once 12.04 was released, the developers no longer wanted anonymous bug reports so they disable this ability. They only want bug reports that the user themselves manually takes the time to file.

This is understandable but I would consider it a bug that apport/ubuntu-bug is presenting the user with non-actionable information. When development stops and they no longer want a high volume of bug-reports turning off automatic bug reporting is one thing, but leaving the user without a path (at the very least a link) to report to launchpad, and without a way to save the information contained within the bug report should be rethought.

My Solution to Non-Actionable Error Reports

I know what I am going to do next time I get one of these unreportable/unsavable errors. I'm going to take a screenshot of the window, run apport-bug apport and file a bug saying that apport should not present the user with non-actionable information. At the very least the user should be able to save the report for their own use or for manually reporting a bug.

How to Proceed Regarding your GPU Bug

As for your problem, apport was running a script to debug GPU problems.

If you aren't actually noticing problems with your GPU other than these error messages I'd say you can safely ignore them.

If you are seeing any weird graphics related behavior, keep an eye on your logs--specifically xorg.0.log and syslog, but maybe the kernel logs as well. If you are noticing errors copy them down, and try to make a best guess (or ask) whether it is a driver problem, kernel problem or X11 problem. Then use apport to file the bug against what you determine to be the best package (for example for my nvidia driver I would enter apport-bug nvidia-current-updates), be as detailed as you can be in the resulting bug report and put the symptoms you experience and any errors you noticed into the description when you file the bug. More information about filing bugs is here and here. Good luck.