Feeling disempowered by Ubuntu's new bug reporting policy/system. My Intel i5 machines have all experienced daily (if not more frequent) freezes, but it's very difficult to report bugs now and policy instead is just for ubuntu to collect counts; no way for me to see that anything is (or is not) being worked on. 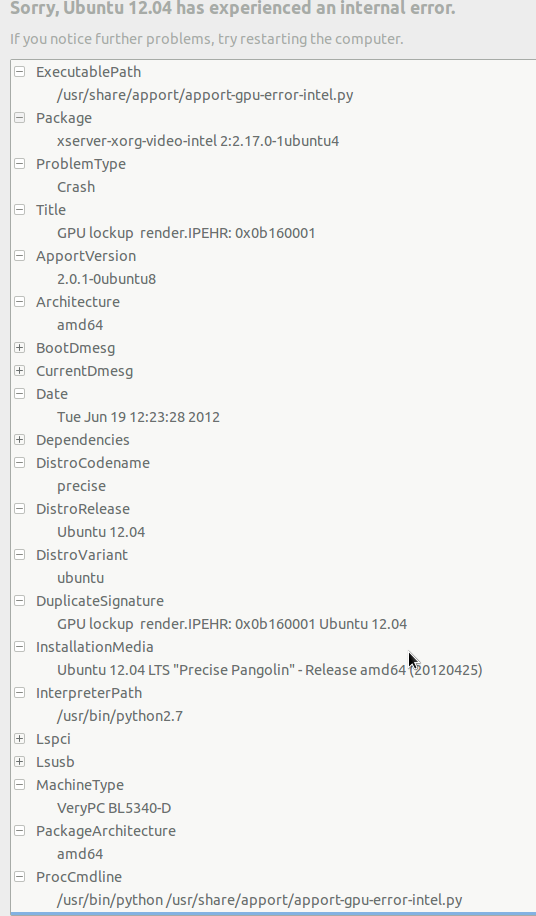 It looks like this report could contain useful information. Is there anyway to make sure it gets provided to the people who can fix it?

Install xdiagnose version 2.5.1, which I uploaded to precise-proposed the other day.

The problem is that the Intel graphics driver has these weird "false gpu hangs". The GPU locks up but then recovers so that you don't actually notice anything, but it still is enough to trigger the error handler. Disabling apport doesn't disable this handler; 2.5.1 disables the handler directly.

Ubuntu – How to i report a bug about apport-gpu-error-intel.py crashing

In this case, the source package has the same name as the binary package (xserver-xorg-video-intel), but that may not always be the case (e.g. binary package apt-utils has source apt)

Bugs for that package can be reported on https://launchpad.net/ubuntu/+source/xserver-xorg-video-intel/+bugs

Thanks for your interest in the Ubuntu error tracker project.

As of Precise 12.04, this behavior and workflow changed. As I discovered in Bug #993450 “Apport fails to submit bug report”, by default apport no longer opens a bug report (and it is awkward but not impossible to get it to do so).

Apport never created bug reports post-release. When a release is still in development you can use apport to file Launchpad bugs (and error reports).

In a final released version of Ubuntu we now show error dialogs. This is a great improvement from a program "going away" without any feedback and the user being left wondering what just happened.

The statistics from the data collected when people choose to send these reports show up on http://errors.ubuntu.com.

I'm left with this question: how does a user learn what the status of the problem is? The blueprint now has this requirement

The user should have some way to check back on the status of their crash report; e.g. have some report ID they can look at to see statistics and/or any associated bug #. E.g. provide a serial number at time of filing that they can load via a web page later on.

I'm going to remove that. That was never the intent. The user interface is careful not to make promises about getting any feedback on the report.

These are not bug reports.

Our intent is to reduce the amount of time it takes for developers to find the most pressing issues, collect the needed information to fix them, and get the fixes to users.

We've solved the problem of finding the most pressing issues. That's the front page of http://errors.ubuntu.com.

Collecting the needed information quickly, and without involving a long feedback loop with users who are experiencing the problem is addressed in foundations-q-bucketing-improvements. The plan is to allow developers to hook into the information collection process server-side. If I need /var/log/syslog but it's not already provided, I just change a setting on http://errors.ubuntu.com and the next person who experiences the error automatically adds it to the data they're sending.

Getting fixes to users quickly is addressed in foundations-q-updates-from-crash-reports. When users submit an error report and that error has already been fixed and released, a dialog will come up asking if they would like to upgrade to the version of the software which fixes the problem they just experienced.

And how does a developer get into the game? Going to https://daisy.ubuntu.com just provides an "Incorrect Content-Type" error message.

http://daisy.ubuntu.com is not intended to be used by humans. It's there for the error reporting daemon (whoopsie) to send reports to.

It would be absolutely wonderful for other people to get involved. I'm currently the only one hacking on this full-time.

There are four parts to the system.

There is a slightly out-of-date set of scripts under the setup/ directory in lp:daisy that should give you some idea of how the pieces fit together. I've been working on juju charms to replace this. The goal is a single command to deploy the entire infrastructure in the cloud for testing and development.

You can find my email address on Launchpad if you have further development questions.