I've got users using RDP to connect to a Windows 2008 with Windows Server 2008's Terminal Server Application mode. (Users RDP in and get an app that looks like it's running locally.)

It works great. But our guys need to be able to run multiple instances of the app locally. I can manage to seperate the users and handle everything on the Windows 2008 Terminal Server side – but I've got one major issue.

On the Windows clients (that are running RDP to connect) – I can't run more than one session of tsclient (the Remote Desktop sofware.) I've tried duplicating the shortcuts that the users use to launch the session, I've tried renaming the server (using hostname in one shortcut and IP address in another), but no matter what I do, it keeps focusing the already existing RDP session rather than creating a new one. However, if I don't use a shortcut, I can have two RDP sessions going at once (haven't tried connecting to the same server yet.)

How can I tell Remote Desktop to open a new session rather than reusing the old one?

The problem can be solved if you can convince your users to use the product Royal TS, an RDP client program that offers more features than the standard Windows Remote Desktop Client. (version 1.5 is still freeware).

This product actually uses the Windows Remote Desktop ActiveX, but embedded in its own windows. These windows can be organized in tabs, so you can enjoy multi-tab remote desktop. Most important for you, you can define multiple logins, each with its own user name and password (unlike Microsoft's RDC which only remembers the last login). You can even access the same site concurrently through multiple windows with different/same logins for each window. The logins can be organized in a 2-level hierarchical tree.

Uncheck the pin on the "outer" RDP's toolbar to hide it. You can still get to it if necessary (hold the mouse against the edge of the screen), and any inner RDP connection toolbars will be visible.

Alternatively, other RDP clients such as Remote Desktop Manager might have a different toolbar when you run them full screen, so you'll know the custom toolbar is for the outer connection and the standard toolbars are inner connections.

Edit: Microsoft Remote Desktop Client 7.0 allows you to move the RDP toolbar from side to side by dragging it. You can move the outer toolbar to the side so you can tell it apart from the others.

A Task Scheduler event can do that. Make a task that launches notepad with a text document listing notes you want to pass to each other. I would suggest three triggers so you cover when the server has rebooted or when one of you has logged off in addition to reconnecting. Example below is from a task to run BGInfo (a Sysinternals utility to put some information on the wallpaper) for ideas. 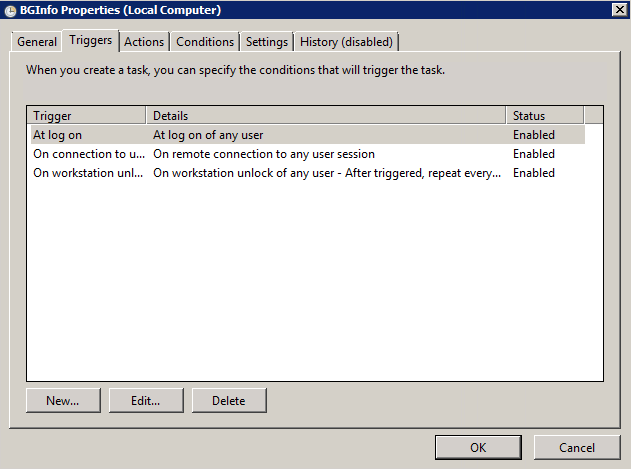