I usually use the Alt + Numpad plus – Unicode method to enter Unicode characters. But this method doesn't always work in Firefox. Sometimes the hex code I need to type overlaps with some Firefox shortcut key. For example, I can't introduce the letter ð because its hex code is 00F0 and when I get to the F, Firefox interprets the fact that both Alt and F are being pressed as a command to open the File menu.

The following Firefox keyboard shortcuts interfere with my typing:

How do I get around these Firefox hotkeys so I can enter any Unicode character I want?

This is what I have tried and found that it doesn't work:

EDIT: I am interested in a solution that does not require AutoHotkey or other third party software.

I installed the following add-on, Shortkeys (Custom Keyboard Shortcuts) for Firefox and disabled the unwanted shortcuts like this: 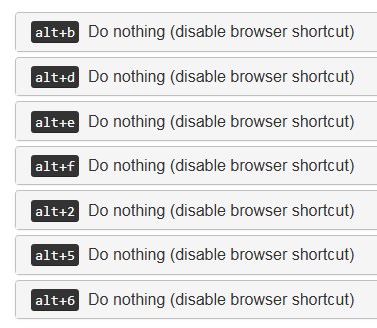 I made sure each shortcut I wanted disabled had the same settings, like this: 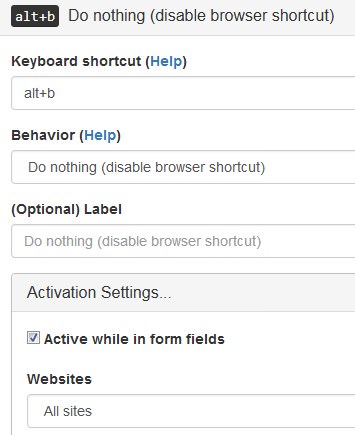 Although this partial solution is keyboard layout independent and allows me to enter many characters that were impossible before I installed the add-on, it has some limitations. For example, I can enter the letters Ð (U-00D0) and ð (U-00F0) by using the input method described in the question but for some odd reason I can't enter Ý (U-00DD), ý (U-00FD), Þ (U-00DE), þ (U+00FE), Æ (U+00C6), æ (U+00E6), Ö (U+00D6), ö (U+00F6). It seems that if the last key pressed before the release of the Alt key is one of the shortcut keys, the Shortkeys add-on intercepts that and interferes with the input method.

EDIT: The Easy Unicode Input Firefox add-on seems to be the best solution so far. All I have to do now is press Ctrl+' to activate the Unicode Input Mode and then type code of the character I want. For example, to enter the character Ö, I press and hold Ctrl hit ' release Ctrl and then type 00d6. The drawback of this method is that it cannot be used in the Find on this page search field, or in the Address Bar, or in the Search Bar.