We are having a problem with one of the database server of one application, possibly caused by some code that is creating a problem in the way Mysql manage it's memory.

Until the second week of April, our db server has a stable consumption of memory of about 5 gigs (with a maximum of 7 gigs). But then, it started to increase limitless, even surpassing it's theorically maximum possible allocation.

This is our yearly munin graph showing the increase in the last 2 months: 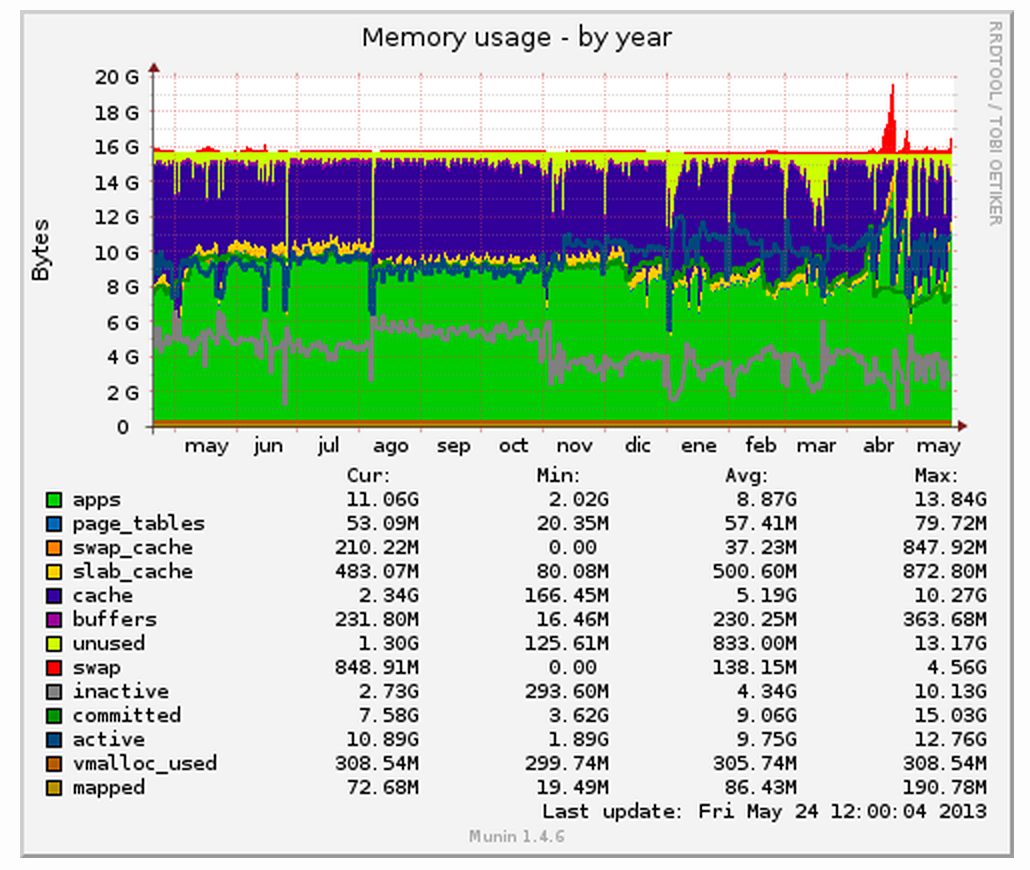 This is another view from the last seven days after a restart in mysql:

This is the report created by mysqltuner.pl:

We are in unknown territory here. Any help will be appreciated!

There is not actually a way to calculate maximum possible memory usage for MySQL, because there is no cap on the memory it can request from the system.

Here is my theory on what's contributing to your excessive memory usage:

Given that your max_connections is set to 200, the value of 128 for thread_cache_size seems far too high. Here's what makes me think this might be contributing to your problem:

When a thread is no longer needed, the memory allocated to it is released and returned to the system unless the thread goes back into the thread cache. In that case, the memory remains allocated.

If your workload causes even an occasional client thread to require a large amount of memory, those threads may be holding onto that memory, then going back to the pool and sitting around, continuing to hold on to memory they don't technically "need" any more, on the premise that holding on to the memory is less costly than releasing it if you're likely to need it again.

I think it's worth a try to do the following, after first making a note of how much memory MySQL is using at the moment.

Note how many threads are currently cached:

Next, disable the thread cache.

This disables the thread cache, but the cached threads will stay in the pool until they're used one more time. Disconnect from the server, then reconnect and repeat.

Continue disconnecting, reconnecting, and checking until the counter reaches 0.

Then, see how much memory MySQL is holding.

You may see a decrease, possibly significant, and then again you may not. I tested this on one of my systems, which had 9 threads in the cache. Once those threads had all been cleared out of the cache, the total memory held by MySQL did decrease... not by much, but it does illustrate that threads in the cache do release at least some memory when they are destroyed.

If you see a significant decrease, you may have found your problem. If you don't, then there's one more thing that needs to happen, and how quickly it can happen depends on your environment.

If the theory holds that the other threads -- the ones currently servicing active client connections -- have significant memory allocated to them, either because of recent work in their current client session or because of work requiring a lot of memory that was done by another connection prior to them languishing in the pool, then you won't see all of the potential reduction in memory consumption until those threads are allowed to die and be destroyed. Presumably your application doesn't hold them forever, but how long it will take to know for sure whether there's a difference will depend on whether you have the option of cycling your application (dropping and reconnecting the client threads) or if you'll have to just wait for them to be dropped and reconnected over time on their own.

But... it seems like a worthwhile test. You should not see a substantial performance penalty by setting thread_cache_size to 0. Fortunately, thread_cache_size is a dynamic variable, so you can freely change it with the server running.