I have a query where I JOIN 4 weekly "summary" tables, and SELECT a MIN and a MAX of units FROM each table. This would give me the highest/lowest total units sold for, and I'm pulling an average from another table.

Now I need to add two more columns, HighDate and LowDate. These columns represent the date for the week that sold the highest/lowest units.

How would pull the Date column from the correct table so my end results looks like below:

As a another option

I've done this using a CTE query as I find it easier to follow and explain.

The first CTE is just your Ago data.

The second CTE ranks each row of the Ago data using ROW_NUMBER based on the ordering of the TotalUnits. I have include the Date in the order so that if there are duplicate TotalUnits the first occurrence will be picked.

This query can be run over multiple UCC12UPCCode's

Basically seems to be picking the MAX id from a partition, not max across all partitions

Writing TOP (1) without an ORDER BY clause to define which row is 'top' means the query processor is logically free to return any row from the set. The query plan selected by the optimizer happens to return a particular row (highest id from the first partition) but you cannot rely on this, even if it were a useful result.

Whenever you use TOP you should always specify an ORDER BY at the same scope to produce deterministic behaviour - unless you really do not care which row(s) come back.

The optimizer is lacking some logic to transform a scalar MAX or MIN aggregate over a partitioned index to a global aggregate over per-partition aggregates. Itzik Ben-Gan explains the limitation and provides a general workaround in this article.

If the highest partition number is known and guaranteed not to change, the workaround to specify a literal partition using the $partition function will work, though it may fail in a non-obvious way if the partitioning strategy changes in future.

This 'solution' works by eliminating all but one partition, resulting in a simple seek on one partition of the index.

The same optimizer limitation broadly applies to TOP (1) ... ORDER BY. The ORDER BY makes the result deterministic, but does not help produce a more efficient plan in this particular case (but see below).

Since id and timeSampled increase together (though there is nothing in the schema to guarantee this) you could rewrite the query as TOP (1) ... ORDER BY $partition DESC, id DESC. Unfortunately, the DESC keys on your index and ASC implied leading key $partition means the index could not be used to scan just one row from the index in order.

If your index keys were instead id ASC, timeSampled ASC the whole index key would be $partition ASC, id ASC, timeSampled ASC. This all-ASC index could be scanned backward, returning just the first row in key order. This row would be guaranteed to have the highest id value in the highest-numbered partition. Given the (unenforced) relationship between id and partition id, this would produce the correct result with an optimal execution plan that reads just a single row.

This 'solution' lacks integrity because the id-timeSampled relationship is not enforced, and you probably do not want to rebuild the nonclustered primary key anyway. Nevertheless, I mention it because it may enhance your understanding of how partitioning interacts with indexes.

On reason this can happen is that you're using local variables.

The problem is that this query takes so much time to go, despite all of the indexes i've made on different columns.

Here's an example using a similar setup. In the Stack Overflow schema there's a narrow-ish table called Votes that looks like this. 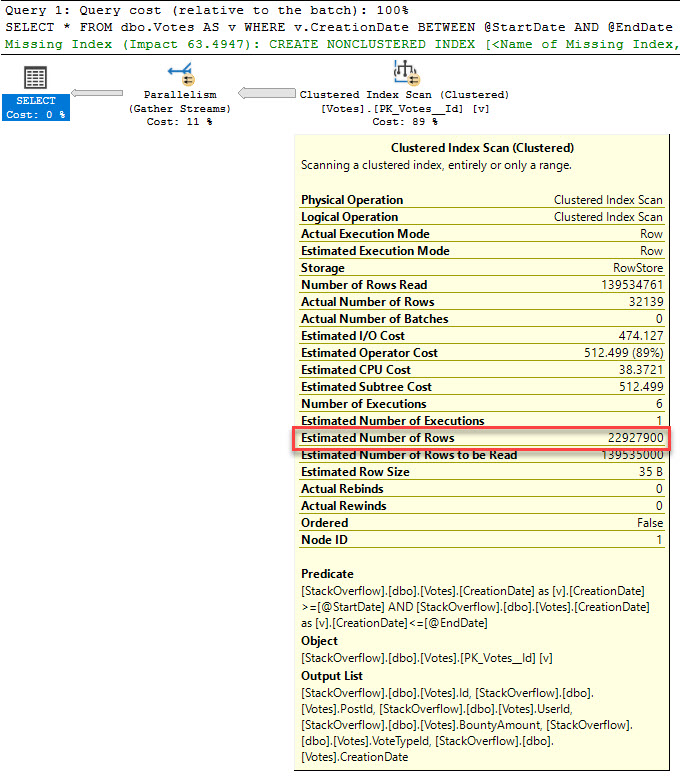 The cardinality estimate for unknown variables using between is 16.4317%. That leads to a clustered index scan and a missing index request for an index that covers the entire query.

If you run the query with RECOMPILE, you allow for the parameter embedding optimization.

Which gives us a different query plan, and a more accurate estimate. 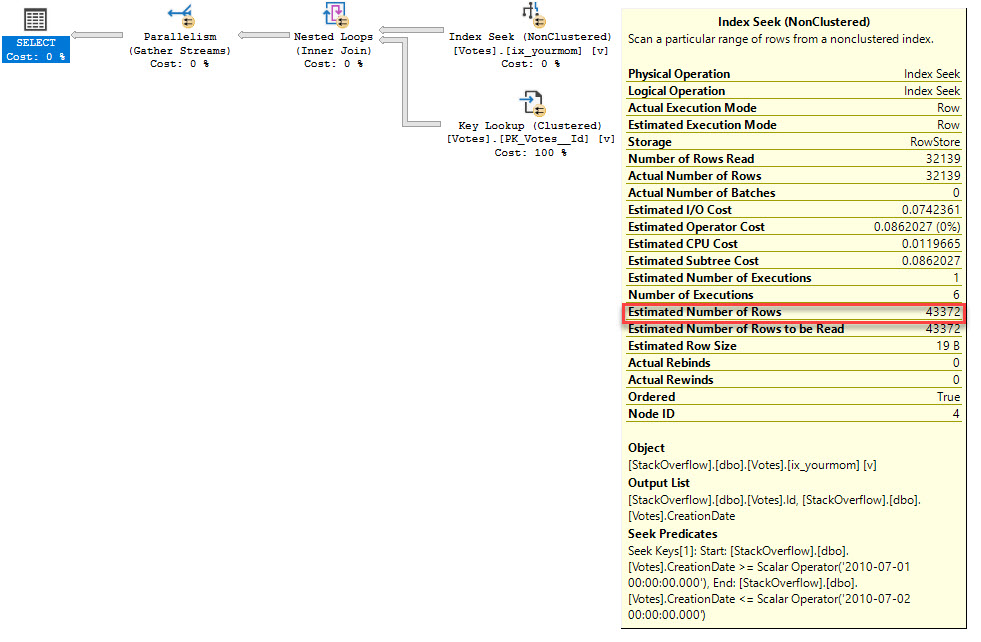